Having only started rowing 11 months ago, 17-year-old Paralympic hopeful Scott Jones is already dreaming big as he chases down World Championship and Paralympic selection while powering his way towards national and world records.

The BTEC Sport and Exercise Sciences student – a former world record holder for shot put and discus – has already shaved minutes off his indoor and on the water times, placing himself firmly in contention for selection for the 2020 Paralympics. His recent personal best and victory at the British Rowing Indoor Championships placed him a fraction behind the pace of a double Paralympic gold medallist.

“It was a bit of a surprise win,” Scott admitted. “I had set myself a target of four minutes and eight seconds over the 1000 metres, which would have seen me take two seconds off my previous best. As it happened, I took more than 10 seconds off, which was a shock but at the same time great to see that I’ve got the ability to keep setting faster times.”

Scott’s rise has been rapid and his training has seen him slice large chunks of time off of his personal best but the young rower knows that next year’s Paralympics are too soon in his development and will focus his attention on competitions further down the line.

His winning time at the recent indoor competition was only one second behind leading GB rower Tom Aggar’s previous winning indoor time earlier in the year but Marlow Rowing Club’s Aggar has a wealth more experience on the water, having raced, and won, at two previous Paralympic Games.

“My main aim at the moment is to keep pushing as hard as I can and putting in the hours training to make the senior squad and then focus my attention on things like the World Championships in 2017 and the Tokyo Olympics in 2020,” Scott said.

Scott is currently part of the Great Britain development squad, an emerging programme that supports promising talent aiming to make future Paralympic teams for 2020 and beyond. While Scott’s rise in the world of rowing has been rapid, the teenager already has some major achievements firmly within his grasp.

“I can’t believe how quickly I’ve developed during my time at Hartpury,” he said.

“When I first started, my one kilometre indoor row was around five minutes and it’s now below four minutes. My water time was just under seven minutes and I’ve brought that down to five minutes and 20 seconds. There’s a lot of training behind it though and it hasn’t just come through luck.

“I’ve had to put in a lot of effort and Hartpury have really helped to support me throughout, whether that be in the gym, on the water or with my nutrition.

“I know that at some point my development it going to taper. I’m going to keep working as hard as I can to keep to shave as much time off my PB as I can but there will be a point at which my progress starts to slow. I’ve got the national record in my sights at the moment and I’m determined to make that mine before going after the world record. It’s going to be a tough ask to take that much time off but I’ll keep working with that as my goal.”

Scott is no stranger to being at the top of his sport. Before a series of strokes left him with brain damage, Scott was making a name for himself on the Gloucestershire sporting scene as a talented multi-eventer with Cheltenham and County Harriers as well as being a keen swimmer and enjoying karate. With dad Gary an international sprinter and mum Liz a talented 1500m and 3k runner – Scott’s sporting prowess was pretty much a given.

Following his accident, Scott broke world records at junior level in the F34 shot put class at his first ever international competition before breaking the men’s F34 world record in the shot put at the IPC World Championships in 2013. Unfortunately his throwing career was ended by a severe shoulder injury at the UK School Games.

He said: “Before my injury, I was a determined person and I was hoping to come and play rugby at Hartpury but since my accident, I’ve had to channel that determination elsewhere. It’s hard to explain but I look at it as ‘if I want something, I have to work for it’ – I’m not just going to get there by sitting around and thinking about it.

“I’m hoping my diploma will lead me on to university and a career in the sports science industry. For now, it’s great being able to continue my studies alongside my sport. I’ve got my sights set on Tokyo, I’m determined to achieve my Paralympic dream. I’ve been on one hell of a crazy journey but I think I’ve proved I’m always up for a challenge.” 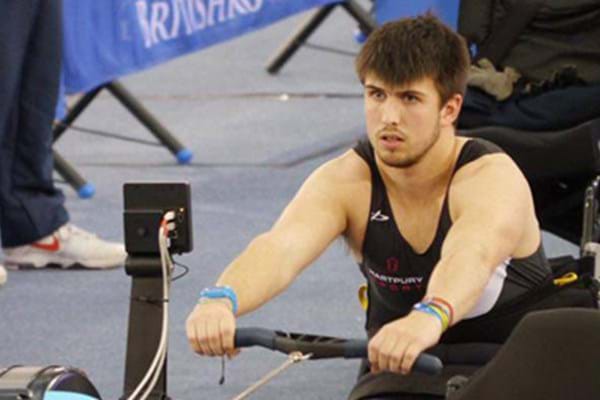