Looks can be deceiving and, at first glance, you’d hedge your bets that Hartpury has welcomed a hedgehog to join its ever-growing animal collection.

But the college has actually opened its doors to a lesser known species all the way from the African island of Madagascar with Morris, the lesser hedgehog tenrec, settling in well to his new Hartpury home.

Although the two-year-old may look like a hedgehog, the tenrec can resemble a wide variety of mammals, including hedgehogs, shrews, opossums, mice and even otters.

Isolated from many other would-be mammalian competitors in Madagascar for millions of years, the tenrec evolved into many different species as it adapted to its niche habitat to thrive, and survive, in its environment.

And Morris is now getting used to his new surroundings with Hartpury students playing a key role in its care and nurturing its development.

Emma Bain, Hartpury’s Animal Management Unit Technician, said: “It’s true that the tenrec’s defence mechanisms of coiling into a ball and raising their spikes are extremely similar to that of a hedgehog.

“They are also primarily nocturnal and, due to their poor eyesight, they depend on their incredible sense of smell to locate food.

“We have created a brand new vivarium for Morris, which has space for him to climb and take sand baths, which he will love.

“Tenrecs are not shy creatures so Morris makes a great addition to the unit as he does not mind being handled. He will prove useful for the ecology, conservation and handling units that our students study here at Hartpury.

“Plus he shows students that the animal kingdom can throw you a few curve balls!” 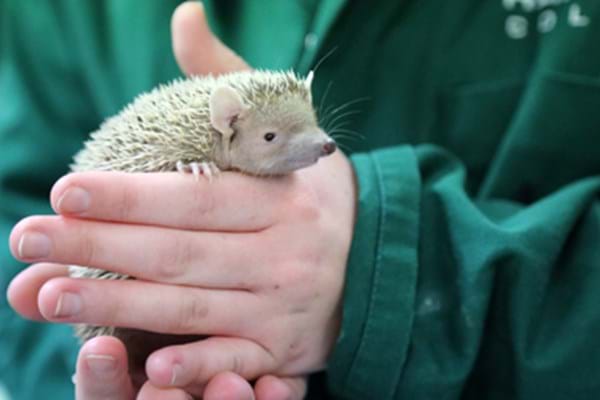