Hartpury student Hannah Jones still has her sights on a top three Six Nations finish despite her Welsh side losing out to defending champions Ireland in the Women’s Six Nations over the weekend.

Jones, 19, making her fourth appearance for her country, was unable to prevent the Irish from taking the spoils with a 21-3 victory at home in Dublin.

The Sports Therapy degree student, more comfortable in the fly-half position, lined up in a relatively inexperienced centre partnership alongside Kerin Lake as head coach Rhys Edwards switched things up. Despite beating the Irish 15-5 in a friendly two weeks ago, Jones’ side were unable to make any meaningful inroads this time around.

“We produced a really great performance two weeks ago and I think we were caught a little off guard by Ireland and it’s disappointing to lose having come into the game with a lot of confidence,” Jones said.

“Our expectation is still to finish in the top three though and hopefully we can play some exciting rugby along the way. Scotland will be tough but we will train hard and prepare.”

The Hartpury student has also set her sights on her team qualifying for next year’s Women’s World Cup where she will look to follow in the footsteps of Hartpury students like Natasha Hunt, Ceri Large and Alexandra Matthews – who won the World Cup with England in 2014. Jones would be the first student from Hartpury to be part of a Welsh World Cup squad, if selected, having been too young the last time around.

“I would love to see us qualify for next year’s World Cup – we only need to win two more games during the Six Nations to do that,” she added.

“My goal moving forward is to be selected for the squad if we qualify and help to put Welsh women’s rugby on the map as we push for us to become a full-time professional side.”

The 19-year-old is no stranger to being thrown in at the deep end. Jones has consistently played above her age group from a young age for Ospreys’ regional side before stints in the Under-18s Welsh Sevens side and the Scarlets senior set-up gave her an introduction to top-level rugby.

“I was included in the Welsh senior set-up from the age of 17 and I have learned such a lot,” said Jones.

“It’s great to finally get some time now to show what I can do on the pitch. Hartpury has been great as well in helping me to develop while balancing my studies. There are great facilities at Hartpury and the intense schedule has helped me to mature and develop as a player.”

Jones, who has also featured a number of times for Hartpury’s British Universities and Colleges side and for the Gloucester-Hartpury women’s team, will be looking to add to her four international caps as Wales take on Scotland – who lost out 32-0 England in the opening round of fixtures – this weekend in Neath (Sunday, 14th February). 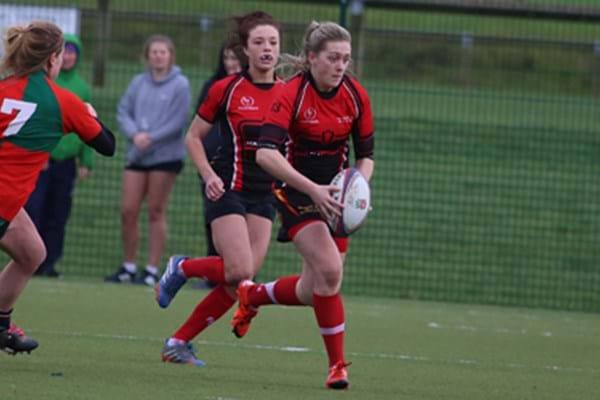