The scoreline will testify that this was not one of the ‘try-fests’ that Hartpury have engaged in recently – however, make no mistake, this was one of the most compelling, intense and enjoyable matches seen at the College in recent seasons.

In a hugely physical contest, the teams fought themselves almost to standstill in an effort to take both the victory and the points which would keep their flickering promotion hopes alive.

Hartpury ultimately prevailed, a result that they just about deserved by virtue of their two tries to nil, but Blackheath more than played their part and led until the closing stages.

The wind, which had got up during the morning and by kick-off was fairly howling along the length of the pitch, was always going to be a major factor. Attacking into it was a challenge – kicking of almost any sort was unproductive – which meant that both sides were consigned to a full forty minutes of defensive duties.

And what defence we saw, from both teams.

Hartpury, with Joe Dancer returning at lock alongside Rhys Oakley, were fielding a relatively lightweight pack. Des Merrey was given the start at loose head and the back row of Jake Polledri, Dan Thomas and man-of-the-match Will Safe offered pace and work-rate rather than added ballast.

In the backs, there was a welcome return for powerful centre Steve Leonard, while all of the bench players were to make an impact later in the game.

Blackheath had first use of the wind and the pattern of the game was quickly set. Their extra weight up front was soon evident at the scrummage where Hartpury were unceremoniously shunted around on more than one occasion and the visitors were happy to use their big runners to try and punch holes through the fringe defence and inside channels.

That they were unsuccessful in this regard was due to a herculean rear-guard shift from the College side. The tackling, covering and organisation were immense and they had to be particularly sharp at the breakdown where the excellent Dave Allen, for Blackheath, was ever present.

In possession, the students had to play with patience, working their way through the phases with ball in hand, often for relatively small gains, but importantly eating up the minutes until the break.

By the interval, the visitors had been restricted to two well-struck Freddie Gabbitas penalties and there was a feeling in the home camp that this represented a job well done. Surely this was more than a six point wind?

The second half quickly became a mirror image of the first, in terms of territorial advantage, and it was Blackheath’s turn to feel the heat. The College, in their usual fashion, tried to put some width on the ball but the wind quickly reminded them that this was not a day on which to ‘over play’.

Instead, they used the boots of Jacob Perry and Gareth Thompson to find the corners deep in Blackheath territory and challenged the visitors to play their way out of defence.

The Hartpury line-out has been generally outstanding this season and lost nothing when Nathan Taylor replaced starting hooker James Stephenson in the third quarter. In difficult conditions there were mistakes from both sides, but Dancer, Safe and Oakley all proved to be reliable targets as Hartpury cranked up the pressure.

A breakthrough was finally made on the hour. Perry floated a penalty deep into the Blackheath 22 and, after Safe’s catch, the resulting line-out drive was well managed to allow Dan Thomas to make the grounding five metres in from the corner flag.

Thompson was just wide with the conversion and Blackheath were able to extend their lead with eleven minutes to go when Gabbitas managed to kick a tricky three-pointer into the wind.

By now Hartpury had added the considerable presence of Gareth Evans to their back row and Mike Flook brought an added stability at the scrum. It was another replacement, though, who made the biggest impact with eight minutes remaining.

Blackheath, as Hartpury had in the first half, were forced to keep the ball in hand and work their way up-field out of defence. Jamie Forrester, again making an impressive appearance off the bench, was not only able to nail his man but also somehow managed to strip the ball in the tackle.

His presence of mind left him with a clear 15-metre sprint to the line, breaking one tackle on the way (pictured) and Thompson’s conversion was good as Hartpury hit the front for the first time in the game.

Three points, despite the elements, was never going to be a comfortable lead but Hartpury went further ahead with two minutes to go as Thompson struck a penalty from 35 metres to square the game away. The celebrations at the final whistle spoke volumes about just how much this win meant to the players.

Hartpury go above Blackheath, into second, as a result but the Londoners still have a game in hand. Richmond’s narrow win over DMP, whose winning run ends at twelve, keeps them 10 points clear at the top.

Cinderford had a rare way win at Ionians, but two bonus points for the home side was enough to edge them away from the relegation zone. With Cinderford and Henley (who lost at Plymouth) looking somewhat adrift, Ionians appear to be in a straight fight with Loughborough, Wharfedale and Blaydon – all also beaten this weekend – to avoid the final drop spot.

Hartpury now get a well-earned week off before travelling to Ampthill for another tough-looking fixture in a fortnight. We would like to thank Blackheath for an outstanding game and wish them well for the remainder of the season. 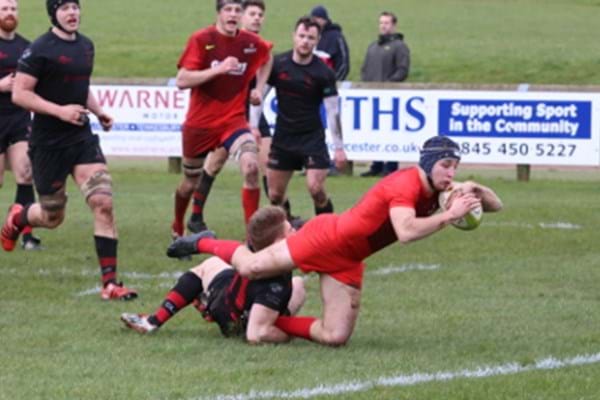