The two best university rugby teams in the south produced a game that was tight and attritional, yet never less than compelling, in good conditions at Hartpury on Wednesday evening.

In the nature of many draws, it is result that neither team wanted before the game and yet which, in retrospect, both might be somewhat happy with in the aftermath.

Hartpury had enough territory and possession in the first half to have been out of sight by the interval, whereas they will recognise that they lost the initiative after the break and could have easily been overhauled before the end.

Despite a number of injuries, the hosts were able to field a relatively strong team and it was the Gloucester scrum half, Ben Vellacott, who was at the heart of their sizzling start.

Prompted by Vellacott, the College elected to run the ball from almost everywhere and with centres Forrester and Cooke (pictured) cutting through the Exeter line almost at will, it seemed that Hartpury’s fast start was bound to bring rewards.

Within the opening minutes Exeter, scrambling in defence, were caught offside and Gareth Thompson’s kick put Hartpury in front. Things got better shortly afterwards, when more incisive back play had the visitors stretched and only a deliberate knock on prevented a score.

The referee had no hesitation in awarding the penalty try and Hartpury were already 10 points to the good.

The hosts never let the tempo drop in the opening period and several forays deep into Exeter territory had them on the verge of a further breakthrough. However, a mixture of good defence, poor discipline and a frequent lack of composure conspired to keep a lid on the scoring.

Another Thompson kick nudged them further ahead, but Exeter were slowly growing into the game and they managed a shot of their own before the break to bring it back to 13-3.

The second half was a different story. A good Hartpury attack early on, started by a strong Harry Wilson break, was foiled by a foot in touch and that was almost the last we saw of the home team as an attacking force.

The Exeter forwards looked strong throughout and they began to dominate proceedings both at the breakdown and at the scrum.

Their attacking play lacked the zip and verve earlier shown by Hartpury, but their strong, direct running began to test the well-organised home defence.

A successful catch and drive, following one of a growing number of penalties, got them right back into the game, before kicks to either side took the scoreline to 16-13 with 15 minutes to play.

With Hartpury now living off scraps and unable to control the ball for any length of time, it seemed likely that the visitors would go on to take the victory, but the defence held firm and Exeter were restricted to one further kick in front of the posts to bring the scores level.

Both teams will qualify for the knockout stage of the British Universities (BUCS) competition, but only the league winners are guaranteed the home ties that would make them favourites to reach the Twickenham final.

This result leaves Hartpury four points clear of their visitors, an advantage that will disappear in the event that Exeter are able to win their game in hand. 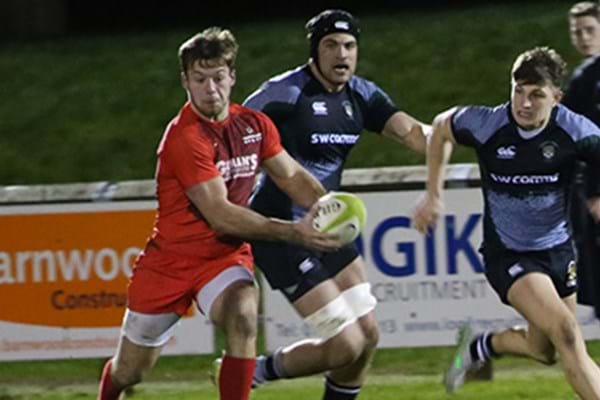