Hartpury’s crop of golfers took to the warmer climates of Spain for a training trip as they ‘ironed’ out their game ready for the business end of the golfing season.

Twenty-four students went to the Desert Springs resort in Almeria to hone their technique and prepare for the second half of the year, which will see Hartpury’s fledgling golfers vie for success across four competitions.

Hartpury currently sit top of both the gross and nett divisions in the Intercollegiate Tour (ICT) and the British Schools and Colleges Tour (BSCT) respectively, with student Kobe Adams leading the way in the individual Order of Merit in the latter while Alex Chalk finds himself in second place in the ICT.

And Richard King, Hartpury’s golf programme manager, is hoping that the five-day Spanish excursion will give his prodigies every chance of securing honours come the end of the season.

“This has been our fourth trip to Desert Springs and each time we have been it always does wonders for everybody’s game,” he said.

“Everyone plays a lot of golf during the trip; a lot more than they would do back in the UK, so hopefully they can take this experience and use it positively for the rest of the season”, he added.

The students took full advantage of the facilities that the Desert Springs resort has to offer, which included use of the short game academy, putting green and driving range, while also playing a full round of golf each day.

King said: “The course and practice facilities were in immaculate condition and the students really made the most of the trip. Some were up very early hitting balls on the range while others were out on the practice facilities until after dark working on their games.”

King organised daily competitions after an initial practice round on the first day, with second year student Nick Ramshaw coming away with victory in the Stableford tournament.

And Ramshaw will be joined by fellow Hartpury golfers Chalk, Rowan Warren and George Bryant in early March as the foursome will be participating in the AoC Sport Open Golf Championships, held at the historic Fairmont St Andrews course in Scotland.

King added: “It’s our first national final of the year so hopefully they can use the warm weather training as a springboard to put on a good showing at the tournament.”

A month later, Warren and Bryant will be joined by Caitlin Evans-Brand in the AoC Sport National Championships as they represent the male and female West Midlands golf teams at Close House Golf Club, Newcastle upon Tyne, on April 15th and 16th.

Hartpury also have two rounds still to play in the ICT and BSCT before the national finals at the end of April and beginning of May respectively and King is hoping that the squads will be able to cement their place at the top of the standings before the final showpieces.

“I think it’s important to maintain our strong start to the season and if the players continue the form they have been showing then we have a strong chance of competing for titles, on an individual and team level, at the finals,” he added. 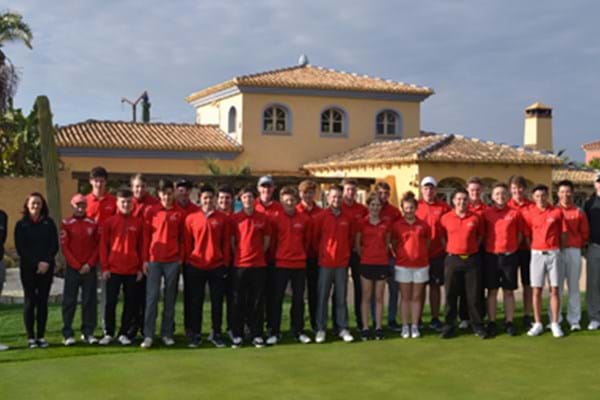