In the proverbial ‘game of two halves’, Hartpury eventually ran away with this fixture, but 40 minutes of toil before the break had yielded only scant advantage.

The story of the game centred around the conditions but, in hindsight, it could have been so much worse. Heavy rain, having fallen overnight and throughout the morning, had saturated the main grass pitch at the Sports Academy to the extent that it had become largely unplayable.

A decision was made to move the fixture onto the College’s IRB-approved rubber crumb surface, thereby avoiding the tedium of the paying spectators having to watch an ‘arm wrestle’ in the mud and, equally, the risk of a drowning…

This solved, maybe, 50% of the problems faced by the teams but there was nothing further that could be done regarding the challenge of playing with a greasy ball in a howling gale. Mistakes, unsurprisingly, became commonplace.

The circumstances were unfortunate, as Hartpury were able to name a strong side, with the potential to provide plenty of entertainment on a better day. Back-rower Gareth Evans (pictured), a former Hartpury student and now very much a part of the Gloucester first team squad, was made available in his search for fitness after recovering from a pre-season injury.

In the continued absence of centre Steve Leonard, the College were able to field the same back division that had done well at Cinderford the week before, while the forwards were strong enough to be able to keep exciting flanker Dan Thomas and powerful Number 8 George Evans on the bench, Will Safe’s specialist line-out skills earning him the nod.

Given this strength, it was surprising to see the students struggling in the opening stages. Henley came out fully fired up and were quickly into their stride. Hartpury were having great trouble in controlling the ball and Hawks pressure quickly allowed James Comben to kick them into a 6-0 lead.

Without ever looking particularly convincing, Hartpury managed to establish a foot-hold in the match and were ahead late in the first quarter. A series of forward drives, with second row Steve Pape prominent, created a platform close to the visitor’s posts and it was a filip to the soaked home support when Will Safe crashed over. Gareth Thompson’s first successful conversion put the student team ahead.

Comben did hit the target again, on the half hour, after the College were penalised at a scrum but another spell of Hartpury pressure gave the opportunity for centre Luke Eves to battle his way over in the corner to restore the lead. Thompson’s well-struck penalty on the stroke of half-time made it 15-9 at the break.

Hartpury were different animal after the interval and they had all five points tied up after a blistering 15-minute spell. First, Ben Vellacott, as we have come to expect, made a telling break before feeding Mark Harrison coming off his wing to cut through the Henley defence.

Minutes later, Vellacott himself was the scorer as Dan Thomas, on as a replacement, played a big part in setting him free.

Finally, Gareth Thompson, made a huge break out of defence before dinking a kick into the path of Jonas Mikalcius, who was able to gather and plunge over with defenders hanging off him. There was a delay before the try was awarded, as Hawks prop Billy Moss was apprehended for an off-the-ball incident that earned him a second yellow card and an early shower.

With a big lead and a depleted opponent, Hartpury were happy to drive home their advantage. Conditions were still tough but the forwards, who had been largely on top after the opening quarter, took charge. Replacement hooker Nathan Taylor was the first to benefit, before the starting hooker James Stephenson, now moved to the back row, grabbed Hartpury’s seventh and final try.

Again, praise must go to the Hartpury set piece. Throughout the game they had the physically bigger Hawks pack in trouble at the scrum and, given the conditions, the line-out worked as well as could be expected.

Bell’s late effort for the Oxfordshire side was nothing more than consolation and Hartpury had their third straight bonus point win.

Even better news was to come after the whistle with confirmation that Blackheath had slipped up at Wharfedale, restoring the College to second in the table. Richmond stay six points clear after just getting the BP in their 25-8 win over Cinderford.

Esher pipped Ionians on Humberside, while Plymouth proved that they were better at mud-wrestling than Blaydon. Next week’s opponents, Darlington Mowden Park, made it eleven from eleven with their victory at Loughborough.

Ampthill had more than enough to see off Rosslyn Park and Fylde also took the honours at home to Coventry.

Hartpury’s season remains very much alive. The next two weeks could be defining, however, as the aforementioned trip to Teesside and the home match with Blackheath are exactly the type of matches that separate the winners from the also-rans. 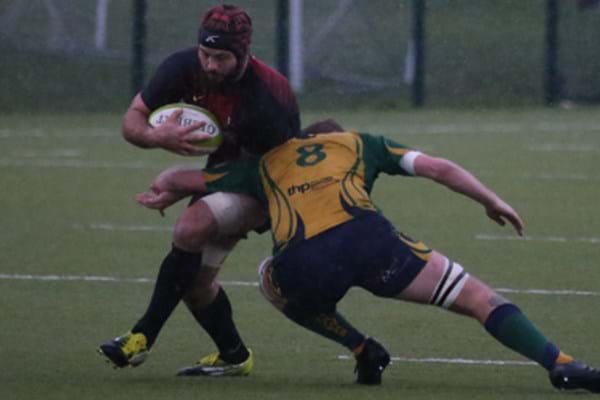