Hartpury RFC had the chance to take their skills and speed to the next level today as they faced the stars of England Rugby.

A squad of 15 players and the RFC’s coaching staff left Hartpury early this morning to take part in a training session with Eddie Jones’ senior England side at Pennyhill Park. After a light breakfast and a briefing from the England head coach, they were put through their paces by England and Hartpury’s coaching staff.

England used the session to prepare for their Calcutta Cup clash with Scotland this Saturday (February 6th) – the first game in their RBS 6 Nations campaign and their first competitive game under Jones. And Hartpury will provide the training opposition again ahead of England’s third match with Ireland at Twickenham on February 27th.

This was the second time Hartpury RFC have been asked to train with England, having also assisted with their preparations for the Calcutta Cup during the last Six Nations but this was somewhat more daunting given that this time, the world’s media were looking on.

The England squad came up against some of Hartpury’s finest student rugby talent, including England Under-20s number eight Will Safe, Lithuanian winger and try machine, Jonas Mikalcius and Ben Vellacott – with the Scotland Under-20s scrum-half Ben Vellacott facing something of a dilemma!

“It’s a great opportunity to have the chance to train with England again. I think last year when we came out here, we showed what Hartpury is about and what we can do at this level. The tempo, intensity and pace is always a step up to anything that anyone is used to. To be fair, England are looking sharp and hopefully they will do well in the Six Nations.

“It is a bit of a struggle to put on the England shirt, especially with my Scottish ties, but I am always happy to help where I can.”

Hartpury Director of Rugby, Alan Martinovic, said: “What a fantastic opportunity for our guys, to have the chance to train with England Rugby at a facility like this. While we pride ourselves on the international players we produce, the majority of them won’t end up playing at this level, so it really is something special.

“It’s a great compliment to Hartpury to have been invited to train with the national team for the second time and a reflection of our ability and skill level that we can provide them with strong opposition. Having said that, training with England is undoubtedly a step-up on that front and that can only benefit the team.”

“Coaching wise, it’s always great for us to be able to forge links with the England Rugby coaching team and wider support staff and share our challenges and experiences. You have access to the best of everything here, from facilities to expertise, and it’s important to make the most of the opportunity. We’re in talks about coming back in a few weeks’ time to assist with their preparations for the remaining Six Nations games.

“It might be a training session but you’re still up against the best players in the country and that’s a demanding exercise. It’s an experience these players will never forget and, once the excitement has died down, it will be time to switch on to the task facing them on Saturday.”

Hartpury RFC will head into that home clash with Henley (2.30pm kick-off) looking to build on last week’s comprehensive win over Cinderford, which sees them sitting third in National League One.

It’s also a busy time for Hartpury’s university side as BUCS reaches the business end of the season, while the college’s Under-18s make up the majority of the Gloucester Academy squad contesting the Under-18s Premiership final against London Irish at Saracens’ Allianz Park on Monday, February 15th.

Hartpury Principal, Russell Marchant, said: "We’d like to thank England Rugby for giving our squad the opportunity to train with them. So many of our talented young rugby players are working hard to one day have the opportunity to pull on an international jersey like so many Hartpury products have before them; and today’s trip to Pennyhill Park will be an inspiration to them.” 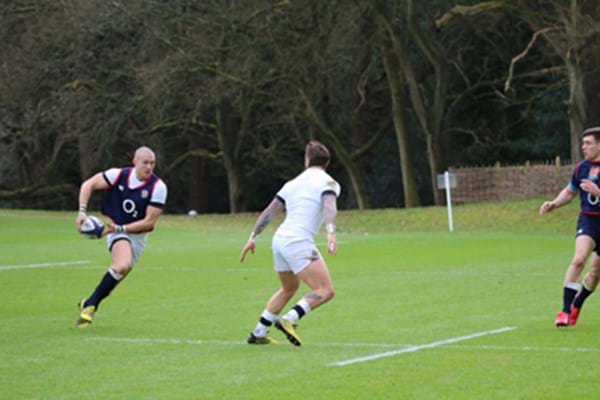