Hartpury’s rowers produced two promising performances as they jumped into the world of competitive eights rowing over the weekend for the very first time.

Reading Rowing Club’s Annabel Stevens and Sheyi Blackett joined them in the eight and, along with cox Rachel Holland from Gloucester Rowing Club, the crew placed 19th overall in the Thames event, which featured 350 women’s eights.

Hartpury Rowing Coach, Tom Pattichis, said: “Given that the eight is not a boat we’ve raced in competitively before, this was a very encouraging performance against some of the bigger school programmes who have more history in eights than we do. Everyone worked hard and I’m pleased with the performance we put in.”

With the girls away in London, Hartpury’s boys’ quad picked up a win in the Under-18s quad event at Gloucester Rowing Club’s home event - the Gloucester Spring Head. BTEC Sports Coaching students Alfie Heath, Jacob James, Charlie Bates and Tom Woodward teamed up to claim top spot in the first division of racing.

Heath, James and Bates teamed up again as the boys also tried their hand in eights racing ahead of their meet at the Men’s Head of the River Race in two weeks’ time.

The trio were joined by fellow BTEC Sport student Harry Cox as well as Hartpury’s intern coaches – and MSc Sports Coaching students – Will King and Ben Jackson. Gloucester Rowing Club’s Ben Rodford and Sam Thornton completed the eight. The crew rowed to a comfortable win over boats from Exeter and Cardiff Rowing Clubs in the senior eight event – part of the second division at the Gloucester Head.

Pattichis added: “With the boys racing in an eight in a couple of weeks’ time, this was a really positive result, especially given that most of our boys have not rowed in an eight before. To come away with a win is encouraging and hopefully will put us in a good place heading into the bigger challenge of our next eights race.”

Hartpury’s rowers will now be turning their attention back to their more familiar quad racing as both the boys’ and girls’ teams prepare for the Schools Head of the River race on Thursday, March 24th. The girls’ crew won the event in 2014 and finished runners-up last year, while the boys will be looking to improve upon respective fourth and sixth place finishes in the last two years. 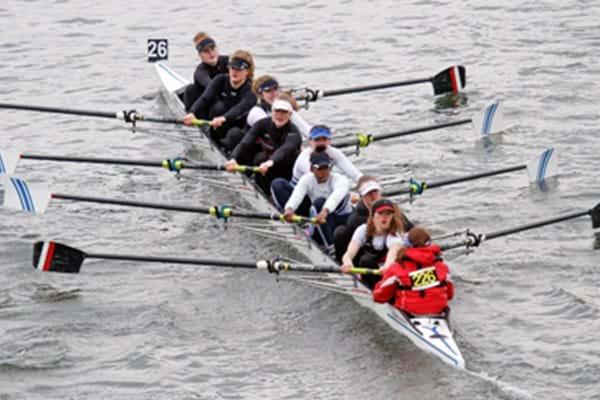