Two members of Hartpury College staff have proved their pedigree as super shepherds after clinching cup success for the second year in a row.

Mike Ford, who is an agricultural lecturer in beef and sheep production, his wife Niki, who works in the transport department at Hartpury and daughter, Katie, 22, won the Mid West Farmer Perpetual Challenge Cup at Hereford Market for their ewes and lambs for the second year in a row yesterday.

The couple, who are lambing 600 ewes this year and also keep 20 Suckler cows, invite Hartpury Agriculture students to their own small farm in Dymock, Gloucestershire, giving them the opportunity to see another system of sheep production from Hartpury’s own commercial Home Farm during practical sessions.

The Fords won top prize at Hereford Market for the best group of 10 Suffolks ewes and lambs, which realised a price of £213 per couple. They also came second with their mules and lambs, which made them the overall champions for the second year running.

The Fords won first prize at Hereford last year with their 10 North Country Mules – the class for 10 white faced ewes and lambs.

Mike said: “We were thrilled to see all the hard work we have put in rewarded. We started lambing our 600 ewes on December 12th and we’re nearly done now with only 80 left to lamb. Lambing for such a long period means plenty of early mornings and late nights in the lambing shed, so it was a proud moment taking the Cup among our peers, who are some of the best in the business.

“It’s also great that we’re able to cross over the work we do on our own farm with our roles as Hartpury staff. It’s invaluable for the Hartpury students to be able to come to our farm and compare our operation to the one they see on the College farm to give them a wider view of the industry.”

Throughout March and April, Hartpury students are helping to welcome this year’s batch of Spring lambs at the college’s new facilities on Okle Clifford Farm, Highleadon.

The students work in groups over eight-hour shifts for each 24-hour period during the season, and their ‘lambing duties’ include checking for triplets, which then have to be separated and paired with foster mothers. They place ewes and their newborn lambs into pens to ensure mothering takes place and monitor the new families’ progress.

Other duties involve continually checking for new lambs, health checks and feeding and tagging the lambs, with all of the data recorded on a computer. All students have access to members of staff to ensure that everything runs smoothly. 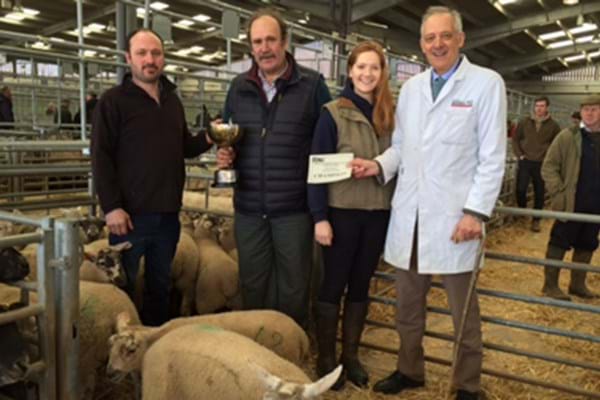