Hartpury’s BUCS women’s team have added yet more silverware to the packed trophy cabinet after an 82-0 victory over Marjons in the final of the BUCS Western Conference Cup.

Having already secured the Western 2B league title 13 points clear in only their second competitive season, the Hartpury University Centre team headed into their first ever cup final in excellent form.

Although they had already seen off their Plymouth opponents in the league, Hartpury were not complacent heading into the final showdown, especially with several players ruled out through injury, illness and international duty.

Playing into the wind in the first half, woman of the match Pippa Robinson stole a lineout on the Marjons’ 22 and, several phases later, England Under-20s centre Holly Aitchison showed great speed and agility to score by the posts. Bethany Hicks converted.

Dictating the pace of the game, Hartpury secured a penalty which Sam Jones took quickly, jinking her way through the defence to score from the halfway line. Hicks converted.

A knock to centre Jazz Boatswain saw Amelia Boyd come off the bench. With her first touch of the ball, she broke the line and outpaced the full-back to score. Hicks’ conversion made it 26-0.

Hartpury received the ball deep from the re-start and number eight Kathryn Buggy carried strongly before Aitchison accelerated away from the defence to score a converted try.

An injury to one of the Marjons players meant a long delay and Hartpury loaned them three players so the game could continue. It followed the same pattern though as Jones wriggled her way out from several defenders to score. Hicks added the extras.

Now running rampant in attack, fantastic hands from the midfield released Boyd to complete her brace which Hicks converted.

Pippa Robinson’s converted try brought up the half-century and Hartpury finished in dominant fashion with two more from Aitchison and one apiece from fly-half Anna Goddard and Hicks. All were converted and the referee blew the final whistle after 60 minutes.

Head coach, Henry Benson, said: ‘It was a fantastic achievement to add the cup to the league title, especially as we’re such a new side.

“The team have worked really hard over the last two years to get where they are now and I’m so pleased for them. Many of the girls have only been playing for a short period of time but have really excelled. With so much potential within this squad, I feel the future of the university side is very bright.” 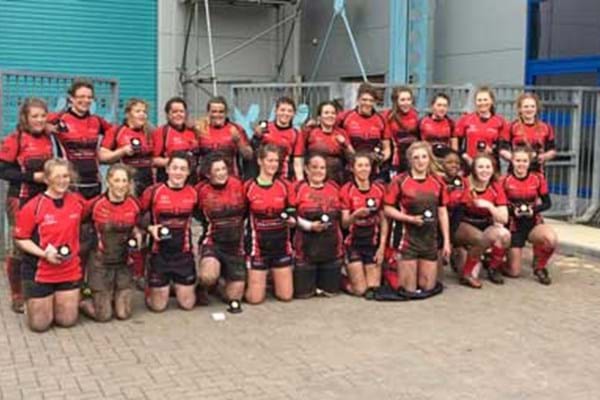