Gloucester-Hartpury women’s team laid the winning foundations for a potential double over Loughborough this week as they bounced back to winning ways at Kingsholm.

After suffering the heartbreak of relinquishing a solid lead to lose 19-14 to Cheltenham Ladies and exit the Women’s Intermediate Cup at the quarter-final stage the previous week, Gloucester-Hartpury clinched a 17-14 success against another higher league side, Loughborough Ladies.

Now it’s up to Hartpury’s university side to complete the double over their old adversaries as they travel to Loughborough on Wednesday for the BUCS Championship semi-final with a berth at Twickenham up for grabs for the winners. Hartpury’s BUCS women’s team will also be in action on Wednesday in the BUCS Conference Cup final at Cardiff Met.

This was a friendly fixture for Midlands Two team Gloucester-Hartpury, who have finished second in their league, and was played out in front of a crowd at Kingsholm who had stayed on after cheering the Cherry and Whites to a fantastic 13-10 Aviva Premiership victory over London Wasps.

It was always going to be a tough test up against a Championship North team but former England flanker Gemma Sharples opened the scoring for the hosts after a searing run by ever-impressive full-back Mary Ann Gittings. Gittings added the extras.

On the half-hour mark, centre Carla Brown took the ball from a standing start and ran 40 metres to score by the posts.

The Loughborough full-back then made a great break only to be hauled down short of the whitewash but it was only a matter of time with the visitors camped on the Gloucester-Hartpury line and they were rewarded with a try to cut the deficit to 14-7 at the break.

One of Hartpury’s most promising young talents, AASE Women’s Rugby programme and College student Anna Goddard, 18, impressed in the first half and then moved to fly-half in the second half. She and Jess Morgan controlled the game magnificently at half-back.

On 60 minutes, Goddard took an opportunity to break the line and scored a fantastic individual try but Loughborough’s riposte was swift with a powerful line break through the centre field and good link play between the forwards proving a solid platform for a try.

The last 15 minutes saw both teams at stalemate to leave Gloucester-Hartpury victorious – the perfect preparation for their next run-out at Kingsholm – the massive west-country derby clash with Bath Ladies on Saturday, May 7th.

Gloucester-Hartpury head coach, Susie Appleby, said: “The girls really enjoyed the opportunity to play at Kingsholm, and were inspired by the men's hard fought win over Wasps.

“It was important for us to get back to winning ways after last week’s disappointment. There were some fantastic individual performances by young players, which was great to see. The future really does look bright for Gloucester-Hartpury women's rugby and we’ve yet again proved our potential Championship credentials.” 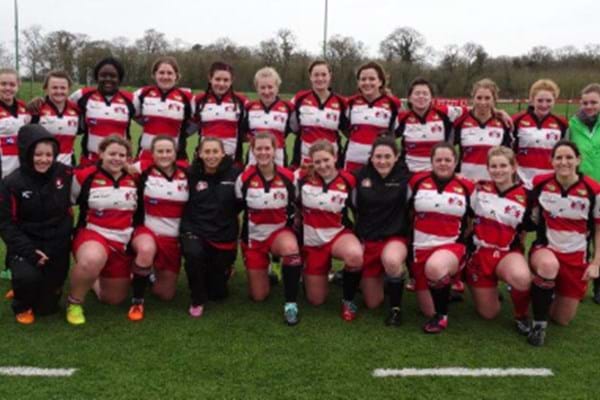