Hartpury’s university football team will be looking to claim back to back BUCS National Championships for the second time in their history as they take on the University of South Wales (USW) in Sheffield on Wednesday, March 16th (kick off 7pm).

Marc Richards’ side are part of an all-south affair as they, as league title winners, take on the second placed side from the earlier league round of the competition, in which Hartpury finished above USW on goal difference.

Hartpury, who come into the final on the back of two hard-fought 2-1 wins over Northumbria University (last eight) and Cardiff Met (semi-final) will be looking to gain revenge for a 3-0 reverse in their final league fixture with Wednesday’s opponents back in January.

Marc Richards, Hartpury’s senior football manager, said: “It’s not every day that you get the chance to win back to back national titles and we’re hugely excited about that opportunity. We’re certainly taking nothing for granted though as our opponents have shown their quality throughout this season.

“All the boys in my squad had to work extremely hard to finish top of the league and get to this final. I think this is the toughest year I’ve experienced in terms of the level of teams we’ve come up against, both in the league and during the knockout stage and I’m incredibly proud of the character and determination the team has shown at every step to make sure they have a chance to defend their title.”

Hartpury will be hoping last year’s match winner, Scott Wilson, will continue his form into Wednesday’s centrepiece at Sheffield Hallam’s Sports Park with the striker having bagged braces in his last two games. It was Wilson’s penalty that proved decisive against the University of Stirling back in the 2015 final.

USW come into the game having beaten Loughborough 1-0 and Durham 3-0 in their quarter and semi-final encounters respectively.

Hartpury have already recorded back to back victories in the championship having beaten the University of Bath in both 2007 and 2008. The side would have won three in a row but were narrowly beaten on penalties by Loughborough in 2009. 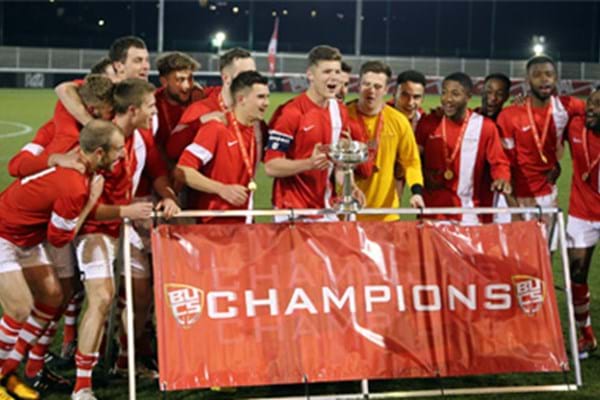