Hartpury’s pentathletes continued their current run of good form as they put in a strong performance in the different discipline of biathlon in the final round of the British Schools Championships last weekend.

A five-strong team of Paris Allen, Sophie Pedlar, Jack Ayling, Bradley Sutton and Lucas Epple travelled to Crystal Palace and came home with a gold medal as the Under-19s boys’ team secured first place while there was an individual third place finish for both Allen and Sutton respectively.

Mat Dewey, Hartpury’s Head of Modern Pentathlon, was also in action and he produced a clean sweep in his swim and run sections to finish top of his category.

Allen and Pedlar were both in action first and the former produced a winning performance in the pool to lift her into the bronze medal position in the Under-19s category, while the latter ran and swam consistently to finish 10 places behind her in 13th.

In the boys’ competition, Sutton and Ayling began promisingly with a strong display in the swim section as the Hartpury athletes finished in second and third respectively. With the field containing a lot of strong runners, the duo produced a season’s best showing in the run section to secure a third and fifth place finish overall. Epple secured a top 10 finish with two solid performances in each section that saw the team finish top of the team leaderboard.

Dewey said: “It’s been another excellent weekend for our athletes and it’s great to bring home a team gold medal for their efforts. Each individual put in a strong performance and hopefully they can carry on showing this form and build on their results.” 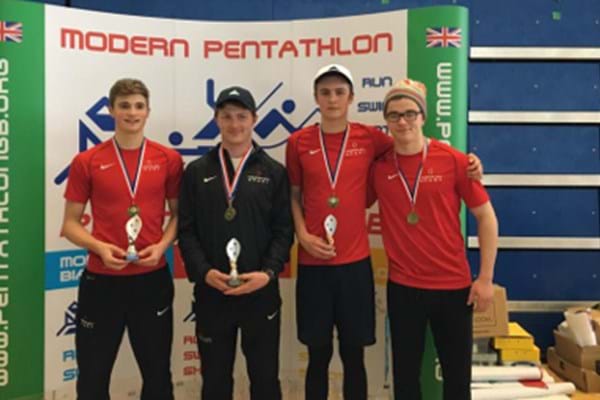