Not for the first time this season, this was a match dictated by conditions, as a strong wind blowing directly down the pitch had a major bearing on events.

Also not for the first time, we saw a Hartpury team that looked a lot more effective playing into the elements and relieved of the opportunity to kick away possession.

The game contained four tries, three of them directly from forward drives and the other a scramble for a loose ball, which tells you a lot of what you need to know. However, Hartpury did play some coherent rugby after the break and could have won by a more comfortable margin, but for frustrating errors at crucial moments.

Beckett were more prosaic. A big pack was their principal weapon and they appeared to offer little else besides. However, there were times in the match when this looked likely to be enough, particularly during a first half in which Hartpury's initial use of the wind yielded only a 13-7 half-time advantage.

The home team struggled in the early scrummages and this disadvantage was to hamper them throughout the game, as the referee was subsequently quick to assume them at fault both at the set-piece and at the break-down. Both line-outs suffered in the conditions throughout the game.

Unsurprisingly, Hartpury had territorial advantage before the break and were ahead within 10 minutes when a loose ball on the Beckett line was swooped on by flanker Alex Craig (pictured).

However, for the remainder of the half they were restricted to two Gareth Thompson penalties and paid the price for failing to stop a long range Beckett forward drive as the visitors eventually bundled over.

The second period started well for the hosts, but despite controlling the ball for long periods they were unable to extend the lead. The introduction of fresh prop forwards Joe Wrafter and Jack Spencer had redressed the balance at scrum-time, while the whole pack was more effective at working the ball up-field.

Aided by the wind, Beckett were able to tie things up with two penalties, including one kicked from inside their own half which comfortably made the distance.

With 15 minutes to go, Hartpury's better use of the ball finally resulted in a line-out deep in the Beckett 22 and pack did the rest with a series of powerful drives. Thompson's excellent conversion, into the gale, was ultimately to prove critical.

The home team appeared to be doing a good job of running down the clock and were even winning penalties at the scrum, before a needless infringement close to half-way gave Beckett one last chance to kick deep and look for the drive.

The try they managed, despite the suspicion of a double movement by the scorer, but the conversion was inches wide and Hartpury were through.

They had the game's outstanding player in centre Jamie Cooke, who looked dangerous throughout, and honourable mentions also go to Luke Stratford, Harry Cochrane, skipper Jamie Forrester and the ever-dependable Will Safe.

Hartpury now travel to face Loughborough, who have carried all before them (so far) this season in winning their 12 divisional games and who ended Cardiff Met's interest with a 53-13 quarter final win last night.

The other semi final will feature Exeter and Durham, who saw off Newcastle and Bath respectively. 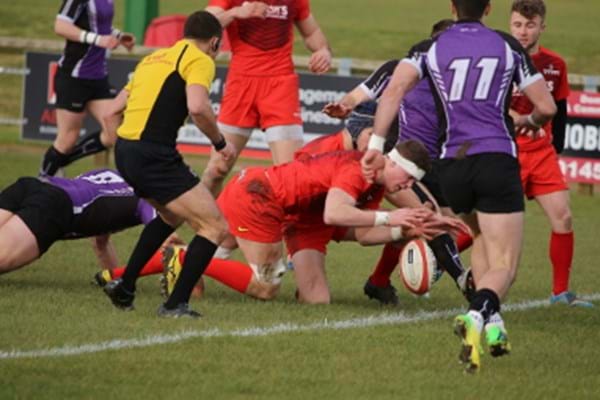