Hartpury’s football production line has unearthed a range of talented footballers throughout the years, but not many can boast an ascendancy into the football spotlight like George Lamb.

After originally not making it into the college’s elite football squad, the promising defender will cap a meteoric rise through the ranks when he lines up for the England Schools Under-18s squad tonight in their opening Centenary Shield fixture with Northern Ireland.

And Lamb will also be looking to shepherd Hartpury’s junior first team to cup success when he lines up in next week’s English Schools’ Football Association (ESFA) Boys Under-18 Colleges Trophy final clash against Gateshead College, with Hartpury looking to retain the trophy for a second consecutive season.

“It’s an absolute honour to represent my country and I am really looking forward to getting out on to the pitch on Friday and giving it my all,” said Lamb, 17.

The youngster will look to play a major role in England’s Centenary Shield campaign, an annual competition played out between the home nations and the Republic of Ireland, after shining in the trial process that saw him compete with over 200 players to secure selection in the squad.

He said: “There were four trials I had to go through and I managed to make it all the way to the final 34 trial at Lilleshall in early January. A couple of days later they sent out letters letting us know whether we made the squad but nobody was home to open the letter and find out whether I had made it!

“Luckily, a friend sent their congratulations to me via a text message so I found out I had made the squad that way!”

The centre half will follow in the footsteps of current Hartpury players Mustapha Bundu and Lewis Fogg, who both represented the England Schools squad last season.

Lamb, who will line up alongside Fogg in next Wednesday’s final, has sought the advice of the duo to prepare him for today’s fixture.

“I’ve spoken to them and they both told me to embrace the whole day and really enjoy the experience”, added Lamb.

“My family are flying over to Belfast to come and watch the game so it is going to be a really proud moment for me. From putting on the shirt to singing the national anthem, I really cannot wait.”

Lamb met up with the England squad during February’s half-term as they flew out to Spain for warm weather training, with the trip providing the ideal opportunity for the team to get to know each other.

He said: “It all felt pretty surreal wearing our England suits around the airport but it was a really good experience. We played against Villarreal’s Under-18s and it was a really tough test but hopefully it will stand us in good stead for the Centenary Shield.”

After joining Hartpury in September 2014, Lamb worked his way into the football programme and spent his first year playing for the college’s third team. After a strong season, he took advantage of a positive pre-season showing to catch the eye of Hartpury’s junior football head coach, Paul Tassell.

And from there, the tall centre back has gone from strength to strength.

Lamb said: “I came to Hartpury because I felt it would be good for me to get used to living away from home and also because I saw just how good the facilities and coaching were for football. Competition for places, particularly in defence, was very tough but I have definitely learnt from watching them play and thankfully I managed to take my opportunity when it arrived.

“After breaking into the first team I’ve managed to push on and I’ve definitely been helped by the strength and conditioning sessions that we do in the gym, as well as the quality of training that we have.”

Lamb’s final game for the Under-18s will be in next week’s final showpiece and he is hoping to sign off in positive fashion.

He said: “It’s a really big few days for me and I cannot wait. I’m not as nervous for the cup final as I am for the England games as I know that all of the lads have been working hard for the match, so hopefully we can all play our best and retain the trophy.”

Tassell added: “George has always had the raw attributes to succeed but the one thing that has really helped him take the next step in his progression is that he listens. He is very coachable and he has always worked incredibly hard, so he certainly deserves this recognition.

“It’s a great achievement to receive a call-up to the England Schools squad, especially when you consider how many players the coaches have to choose from. It’s an even greater achievement for someone like George because to come from the third team to international representation is a great story and we all wish him every success.” 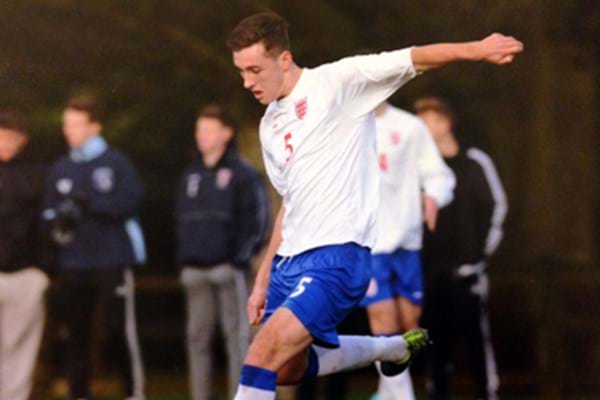