Games don’t get much closer than this. It was never pretty, but it was never dull.

True, the story of the game will be that the last kick of the match drifted wide of the posts to end Hartpury’s BUCS Championship involvement for the current season, but that hardly describes the drama of the closing minutes, nor the character shown by Hartpury in this gut-wrenching defeat.

The game started badly for the visitors. They were 12-0 down before they seriously troubled their hosts, the first score coming as early as the third minute. The referee’s whistle ended a bright opening set from Hartpury and the penalty was sent deep. Although the initial line-out drive was held up, Loughborough were quickly over through Watt, Redman adding the kick.

Pointon was the next to benefit. Running first phase ball off an attacking throw, they found the Hartpury midfield defence inexplicably wide open and the centre was through virtually untouched. Redman hit the post this time.

At this stage Hartpury were at sixes and sevens but, through sheer will-power, they began to work their way back into the game. A Thompson penalty got them on the board and steadily the pressure grew as the Red & Black forwards took charge.

Stratford, MacDonald and Voss all carried hard and after 34 minutes they got their collective reward. With Loughborough now conceding penalties under pressure and the line-out starting to show some signs of functioning, Hartpury were able to work their way upfield.

The final, scoring drive came from around 15 metres out and big prop Alec Clarey appeared to be receiving the congratulations of his team. Thompson was wide with the extras but he was able to add another penalty on the stroke of half-time, following more good play in the loose, and Hartpury were back within a point.

The second half began well for Loughborough who missed a kick at goal shortly after the re-start. But, despite the odd scare, Hartpury survived and, as in the first half, began to assert some control. Eventually, as the game entered the final quarter, Thompson slotted another kick and Hartpury hit the front for the first time, 12-14.

It stayed that way for a long while and there was a growing confidence that Hartpury might be able to run down the clock, maybe even extend the lead. But with three minutes remaining and Loughborough desperately seeking an opportunity, the referee saw something that he didn’t like 30 metres from the Hartpury posts and the home team had their noses back in front.

With the clock virtually expired and Loughborough in possession and on the attack, Hartpury needed a miracle. They so nearly got it.

Not only did they manage a turnover at the breakdown but, attacking from deep and unable to kick, began to work their way through phase after phase. With a mixture of some risky off-loads and a good helping of sheer bloody-mindedness, they were into the home half.

Loughborough, desperate, were penalised for trying to slow down the ball, and then, after kicking it petulantly away, were hit with another 10 metres. Last kick of the game and everything on it.

The rest, as they say, is history.

Thanks to all the BUCS lads for their efforts this season, particularly those that have now served their time and will not be coming back for another go. No Twickenham this year, but the number of freshers in the squad today, plus the continued success of our 2nd XV and the AASE boys, bodes well for the future.

Congratulations to Loughborough, who now go on to play Exeter University in what should be an excellent final. 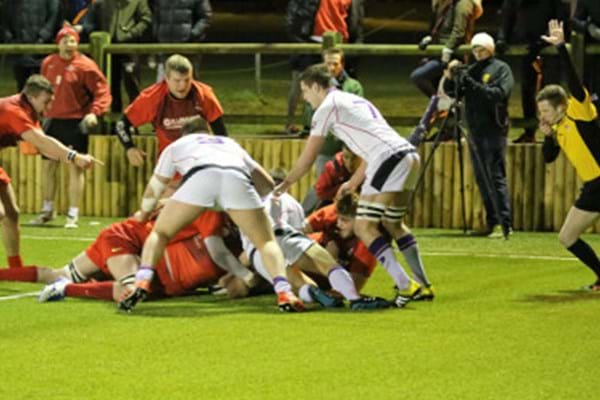