A quickfire Scott Wilson double on the stroke of half-time was enough to send Hartpury’s university football first team to their second consecutive British Universities Colleges Sport (BUCS) National Championship Final, as they edged out Cardiff Met 2-1 in the last four.

Two goals in as many minutes at the end of the first half swung the tie in Hartpury’s favour and saw the team set up an enticing final clash with the University of South Wales in two weeks’ time, as they bid to retain the title they secured last year.

In a game where chances were at a premium, Hartpury were first to threaten their opponents’ goal after 10 minutes when a through ball from Ed Williams found Wilson, but the striker blazed his effort over the bar.

Five minutes later, an audacious 25-yard volley from midfielder Joe Benn forced the Cardiff goalkeeper into action with a good save, while a free-kick at the other end sailed harmlessly wide of Hartpury’s goal.

In the 19th minute, a superb ball from full back Spencer Hamilton was latched on to by Wilson but his strike was comfortably saved.

With both teams favouring a more direct style of play, it wasn’t until midway through the first half that Hartpury’s midfield began to grab a foothold and winger Mustapha Bundu almost created something out of nothing with a 60-yard run, but his cross was blocked by a recovering defender.

From the resulting clearance, a ball back into the box found winger James Fitzgibbons at the back post but his effort struck the outside of the woodwork.

In the 38th minute, Wilson managed to create space for himself in the box with a sharp turn but nobody was on hand to turn his fierce ball across goal into the net.

As the nervy affair rumbled towards half-time, Hartpury had a chance to take the lead when Wilson, who led the line well with an industrious display, was upended just inside the box, with the striker nonchalantly stepping up to send the keeper the wrong way from 12 yards.

And there was just enough time in the first period for Hartpury to double their advantage when another sharp run by Bundu saw Wilson run on to the ball from 10 yards out and despatch his shot beyond the keeper into the far corner.

The second half saw some resolute defending from Hartpury but goalkeeper Andy Hannah had to be alert to make a smart save from a Cardiff attack in the 65th minute.

In the 73rd minute, a delicate lobbed ball by Benn looked to find Williams but the forward could only get a toe on the ball and it was easily claimed by the keeper.

Two minutes later, a volley from centre half Nathan Summers flew over the bar as Marc Richards’ side looked like seeing out the remaining moments without their opponents threatening.

However, Cardiff pulled a goal back in added time when a free-kick on the halfway line saw a Cardiff player beat Hannah to the ball and power his header into an empty net.

The goal proved no more than a consolation as the final whistle sounded a few seconds later to send Hartpury through to another final. 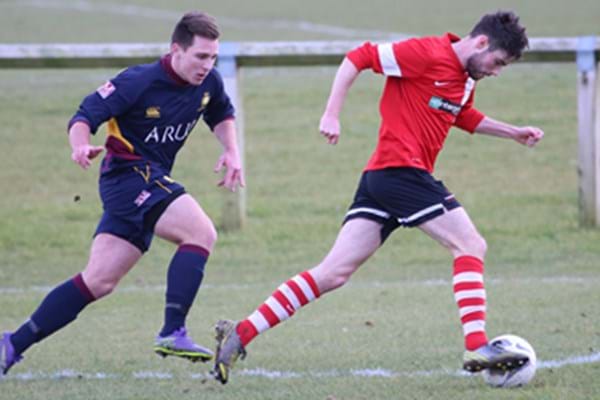