John Barnes is clear he will not be making any sweeping changes to Hartpury’s proven recipe for success as he steps up to the role of Director of Rugby.

The current head coach, who has helped mastermind Hartpury RFC’s climb into the upper echelons of National League One – they currently sit second after a fifth placed finish last season – will take over from Alan Martinovic, who is heading to Bristol Rugby to become their Head of Talent Identification.

He will be supported by current RFC forwards and defence coach Mark Cornwell, who will move into the head coach role. Barnes will continue to coach the RFC backs, as well as overseeing all aspects of the rugby programme at Hartpury in his new role – from the Under-18s through to the university centre side and the seniors.

“I have some pretty big boots to fill with Alan having been in charge for the last seven years – a time of unprecedented success for Hartpury rugby,” said Barnes.

“Alan actually brought me to Hartpury from Bristol Rugby five years ago and I’ve learned a lot from him, as well as all the other coaches I worked with here. We’ve established a really effective culture of working across all parts of the rugby programme and sharing skills and knowledge, ensuring player and coach progression and delivering success across the board.

“Of course I have my own ideas about how I want to take things forward but there’s not going to be a huge amount of change. The fact that we see the rugby programme here as one, with all coaches working across all teams at various points during a season, is what makes it the strongest programme of its kind in the country.

“The pressure now is in maintaining that success and continuing to build on it, but as a group of players and coaches in an elite sport environment, we thrive on that pressure.

“Every year since it started, the RFC team has improved its position in the leagues and hopefully we’ll finish above fifth place this season too. If we finish second, that means we’re aiming for the top next season.”

Barnes actually started out as a talented footballer, playing left wing or midfield for Bristol City from the age of eight to 16, and he didn’t take rugby seriously until he was around 17, honing his skills as a fly-half playing for Bristol Grammar School. He played for Bristol and the South West Under-19s before going to Loughborough University, spending three of his four years there playing in the first team and representing England Students.

From university, he headed to Italy and spent a season playing in Serie A – the highest level of rugby in Italy at that time – for San Dona. Returning to England in 2001, he signed for Henley, playing in the equivalent of the current Championship.

Barnes added: “After a season at Henley, I realized I was unlikely to make a career of playing rugby so I moved back to Bristol and took on a role as the community development coach with Bristol Rugby while playing for Clifton. That’s how my coaching career started out, coaching tag rugby to young kids, and I progressed on to academy coach at Bristol and later senior analyst and skills coach.

“I was also playing for Clifton during those 10 years and spent five of those years coaching there, including my last three years as head coach. And in my final year at Bristol Rugby, I was also the head coach at Bristol University.”

Barnes joined Hartpury in 2011 and, in his first season, coached the university side to a BUCS Championship final triumph. He then moved into the head coach role for Hartpury RFC and has been a key component in their continued journey up the league pyramid, not least the unique achievement in 2013-2014, when Hartpury won the National League title, the BUCS Championship and the AASE League (Under-18s national colleges) title.

“That will probably be the most successful year Hartpury’s rugby programme will ever have,” added Barnes.

“Everyone said there’s no way we could win National Two and BUCS in the same season but we did it and we’ve continued to build on that success. We’ve established such a strong rugby brand that we’re inundated with players wanting to be part of our programme, from the Under-18s through to the BUCS side and the RFC.

“The best players want to come to us and it’s a fortunate position to be in but it stems from our success and the reputation we have established. We’re a relatively new programme compared to some of the big universities and academies but, in a short time, we’ve helped an unprecedented number of talented young players go on to secure professional contracts and represent their country.

“People want to be part of that and, as director of rugby, I’d like to see us establish even closer relationships with clubs to create even more opportunities for our players.

“I’m relishing the challenge of continuing to drive things forward. I’ve always wanted to take on a Director of Rugby role and I’m looking forward to having the opportunity to be more involved in all aspects of the rugby programme at Hartpury, off the field as well as on it. It’s important to have the right people around me and I know we have a great team here. It’s a fantastic opportunity.” 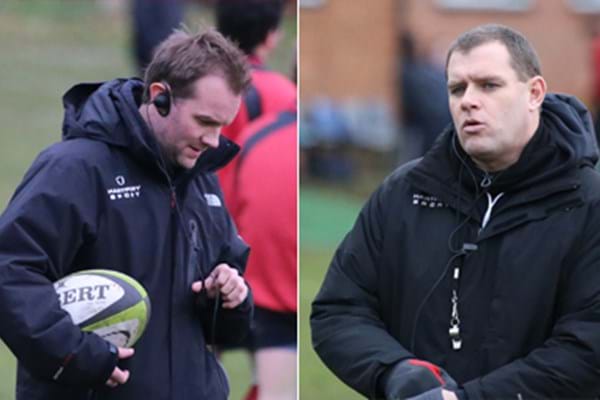