After a frantic opening period that saw both teams score a goal apiece inside the first three minutes, the tie swung in Hartpury’s favour after efforts from Tyler Brock and Ben Hands in the last five minutes of the half gave Paul Tassell’s side the advantage.

And despite Gateshead pulling a goal back late in the game, Hartpury held on and retained the trophy at League One outfit Doncaster Rovers’ Keepmoat Stadium, emulating last year’s squad, who saw off Myerscough College.

Hartpury could not have wished for a better start as centre half George Lamb headed home from a Lewis Fogg free-kick in the first minute, but they were pegged back just moments later when an unmarked Gateshead player powered his header past goalkeeper Ed Cox to restore parity.

In the 16th minute, a pass from full-back Joe Pickering made its way through to Joe Bates but the striker’s lofted strike trickled beyond the far post. The same duo combined on the half hour mark when a cross by the defender was headed wide by Bates.

Hartpury eventually restored their lead when a long throw from Fogg was not dealt with by Gateshead and centre half Jordan Staten’s volley was inadvertently diverted into the bottom corner by winger Brock.

And their advantage was quickly doubled when Hands produced a wicked delivery from a corner that evaded the opposition goalkeeper and went over the line, although Staten also smashed the ball home to make sure.

The second period began with Hartpury in relative control and a marauding run down the left flank by Fogg saw the defender produce an enticing ball across the box that nobody was able to get on the end of, while Gateshead created a rare chance that ended with a shot off target.

In the 70th minute, Hartpury’s appeals for a penalty were waved away when substitute Calum Townsend was bundled over inside the box and the same player then blazed an effort over the bar 15 minutes later.

Gateshead were awarded a fortuitous penalty in the 88th minute and they sent Cox the wrong way from the spot to make the final moments slightly nervy for Hartpury. But the team comfortably saw out the remaining minutes of the match to be crowned champions.

Paul Tassell, Hartpury Junior Football Manager, said: "This was a great achievement for the team and staff. The players have showed tremendous character throughout this competition and, even during the game, this was tested. They have overcome many challenges and continued to work hard to achieve this win. We were always comfortable and the scoreline didn’t reflect that. To win this competition back to back is something special and to see many of the team develop from teams below shows the development pathway we have is continuing to produce student athletes who are capable of winning national titles." 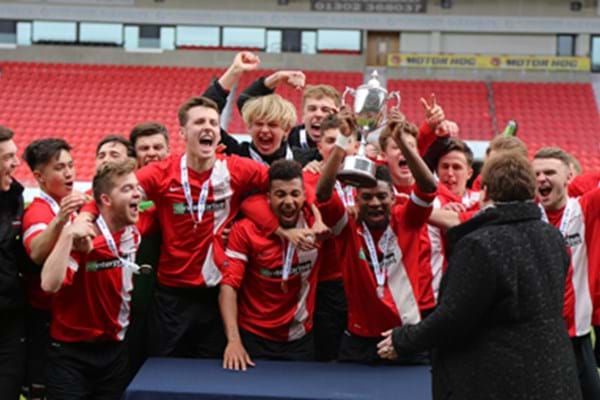