Hartpury’s modern pentathletes struck gold and silver in the National Modern Triathlon Championships at Solihull at the weekend.

The day began with the swim, with all seven Hartpury boys posting strong times and all challenging their personal bests; Jack Ayling setting a new best by 0.01 of a second.

Sutton achieved the fastest time out of the boys to be placed second going into the combined event with Ayling in fourth, Sykes eighth, Murray ninth, Miller 10th, Coveney 14th and Lucas Epple 15th.

The combined event enabled the Hartpury athletes to showcase the hard work they have been putting in recently in this discipline. Sutton shot consistently and ran well to maintain second spot overall while Murray leapt from ninth to third with a clinical combined event performance that was only two seconds slower than the fastest time of the day.

Miller and Sykes also climbed up the rankings with fifth and sixth place finishes respectively, while Ayling, Coveney and Epple worked hard for their eventual, 7th, 14th and 15th respective places.

Mat Dewey, Hartpury’s Modern Pentathlon manager, said: “Boasting so many talented athletes here at Hartpury, we were always going to be strong contenders for the team honours and it was great to see the boys fulfilling their potential.

“This was another impressive showing from the squad as a whole and is testament to our strength in depth with five of the top seven places being occupied by Hartpury athletes.”

A number of the athletes will now head off on international duties over the coming weeks with Sutton and Sykes both featuring in international junior competitions. The next home competition is the National Pentathlon on June 25th and 26th. 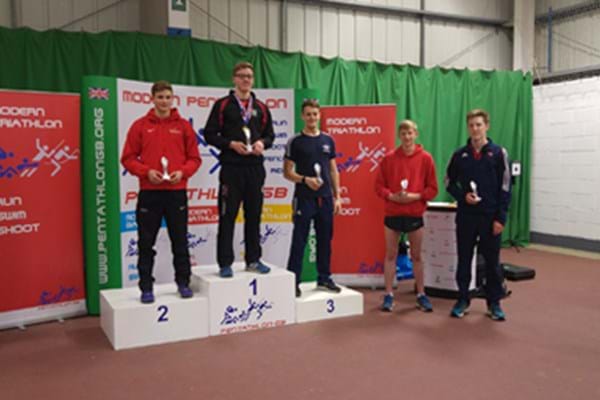