Hartpury bounced back from a slow start at the BUCS Sevens to pick up the Plate – Hartpury’s fourth piece of silverware this week!

They were always going to be up against it after a 5.20am start and a four and a half hour bus journey to Leeds, and, although they kicked off with a 43-7 win against Worcester, their BUCS Sevens Trophy title defence took a hit when they then under-estimated a well drilled Nottingham Trent side.

A disappointing performance saw them go down 19-14 as they lost with the last play of the game, knowing that they would have to beat tournament favourites, the University of Bath, in their next game to progress in the main competition.

The Hartpury team put up a strong fight but were edged out 21-19, leaving them to contest the Plate.

Now into their stride, Hartpury avenged their earlier defeat to Nottingham by claiming a comfortable 31-14 win in the Plate quarter-final and then put in the day’s best performance to despatch a strong Exeter side 24-7 in the semi-final.

Then, in conditions hardly suited to scintillating Sevens rugby as a blizzard blew in, Hartpury ground out a 17-14 victory against Newcastle to win the Plate with a try from Mike Luxton with the last play of the game.

Coach of Hartpury’s University Centre rugby team and Hartpury Sport lecturer, Tim Stevenson, said: “We were obviously hoping we’d be bringing the main trophy home but losing a couple of close games early on cost us and our performances stepped up a gear as the competition progressed.

“It was good to end our season on a positive note with some silverware and give those lads who are graduating this year a memorable send-off.” 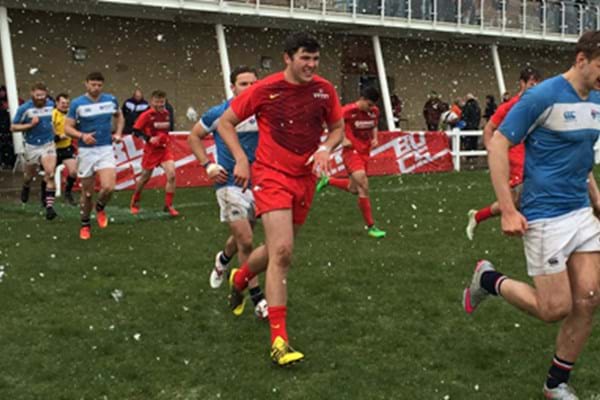