Hartpury’s netballers bounced back from a disappointing National Schools to claim the silver medal at the National Colleges Championships in Newcastle over the weekend.

Sarah Pretty’s side, representing the West Midlands, lost only one game on their way to a sixth consecutive top-four finish at the Association of College’s showpiece event. The team have picked up two golds, two silvers, a bronze and a fourth place finish in the last six years.

Hartpury won their opening two games comfortably as the returning Jodie Blampied captained the side to a 22-5 win over Hartlepool and a 15-6 victory against Wyggeston. The skipper led from the front as the team secured 53 turnovers in their opening two fixtures.

Despite a 24-7 win over London’s Richmond College, Hartpury still had to overcome two of the tournament’s strongest teams to finish the day unbeaten and remain in the hunt for the top spots. Peter Symonds, representing the South East, worked hard to overturn a half-time seven goal deficit but were eventually overcome 23-17 by Hartpury.

Long-standing rivals, Exeter College, provided the final test of the opening day for Hartpury and Pretty’s side were made to sweat for their eventual 19-15 victory. The team turned around a 9-12 deficit in the first half to win and sit top of the table going into the second and final day.

Hartpury were given a wake-up call on Sunday morning as Gower College, who had yet to drop a game at the competition, provided a timely reminder that Pretty’s team would need to work hard to stay in touch with the top teams. Hartpury’s shaky start and a number of errors allowed their Welsh counterparts to come away with a 17-12 victory.

The team bounced back well against Greenhead in their next fixture as shooters Vivian and Hicks finished all of their shooting chances in the first half, ensuring Hartpury went on to win 22-11 against the two-time national champions.

The girls produced an identical score in their final game of the tournament against SEEVIC College to secure second place overall and their second silver medal in six years.

Head coach, Sarah Pretty, said: “This was another great result for the team and an improvement on last year’s fourth place finish, which is brilliant. The National Schools result was hard to take but everyone has bounced back well and they have all showed great commitment and resilience to finish strongly in another national competition. Obviously we’ll enjoy the victory but we now have to focus on this week’s semi-final.”

Pretty’s team take on Truro in the semi-finals of the AoC Superleague play-offs on Wednesday, hoping for a potential re-match with Gower College in the final, should they and Gower make it through their respective games. 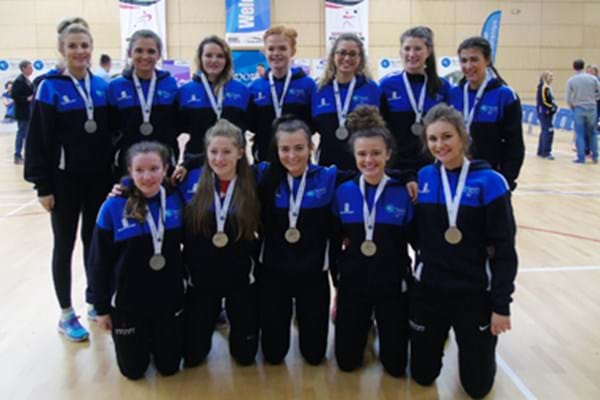