A Hartpury student has been looking at what makes man’s best friend tick and presented her innovative study on canine personality at the prestigious Association for the Study of Animal Behaviour conference in Wales.

Lauren Branfield, currently studying an Honours degree in Animal Behaviour and Welfare, has looked at the links between a dog’s personality and their ability to learn as part of her undergraduate dissertation.

Lauren said: “The tests included getting them to find a ball hidden behind an obstacle, which tested whether they understood the permanence of objects – something humans develop as toddlers. In the other test, they had to manipulate a bottle to release a food reward.

“I measured the time it took for the dogs to solve the problem, how quickly they improved through practice and how engaged they were when trying to solve the puzzles.”

Lauren, who was supervised by Hartpury lecturer Carrie Ijichi, found that the emotional stability of the animal was linked with learning ability, with the most stable performing the best in the tests, while the personality factor ‘motivation’ was linked with how engaged the dogs were when trying to solve the food test.

The 22-year-old’s poster presentation on her research impressed a number of delegates at the conference, especially as she was one of very few undergraduate students presenting work alongside Masters and PhD candidates. She also gave an interview with BBC Radio Wales ‘Science Café’ about her study. 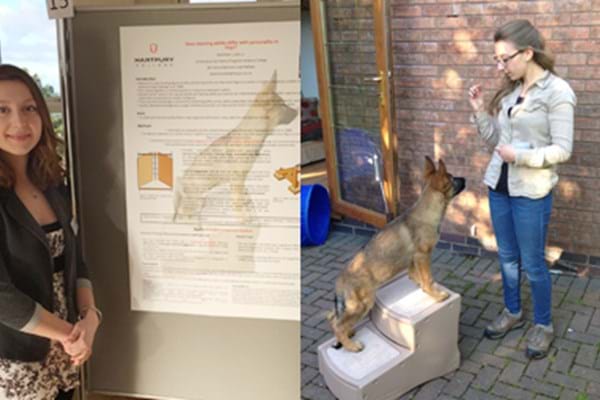