Hartpury’s footballers will look to end their season in style on Wednesday when they face off against Gateshead College in the English Schools’ Football Association (ESFA) Boys Colleges Trophy final.

The Under-18s first team will be looking to emulate last year’s squad, who secured the trophy after a thrilling extra-time win over Myerscough College, but they face the sternest of tests in Gateshead College, who Hartpury have had many close encounters with in the past.

And Hartpury’s Welsh flyer Tyler Brock will be hoping to cap his personal campaign off with a match-winning performance in Wednesday’s final showdown, which will be held at League One outfit Doncaster Rovers’ Keepmoat Stadium.

The 16-year-old’s form in his first season at Hartpury has seen the forward called up to represent the English Colleges squad at a prestigious international tournament - the Roma Caput Mundi - while also playing for the Wales Under-18s Academy squad.

Brock said: “It’s been a really good season for me and representing the English Colleges squad was a huge honour. It was a really strong tournament and playing against a high standard of opposition who were up to two years older than me was a great experience, so hopefully I can build on it.”

Brock came to Hartpury last year after being released by League Two side Newport County and the Welsh starlet has gone from strength to strength as the season has progressed.

“A lot of people told me about how good Hartpury was, for both education and the football side of things, so it made me think that I could reap the benefits of both,” he added.

“The training and the facilities here have helped massively and the standard is really good, so I’ve definitely improved a lot during my time here.

“I’ve taken things in my stride and it’s great that we’ve managed to make it to a cup final. I’m really looking forward to the whole occasion and hopefully we can produce one more good performance to lift the trophy.”

Hartpury’s junior football head coach, Paul Tassell, said: “We have asked a lot of Tyler throughout the season but he has done really well and dealt with everything we’ve thrown at him. You can see that in his performances across the year. He has a lot of potential and has more than deserved his individual recognition so far.”

Wednesday’s final has been rearranged from six weeks’ previous after the game fell foul of the weather, but Tassell’s side will be hoping to produce the same form that saw them sweep aside St Charles Sixth Form College by four goals in the semi-final.

The squad’s route to the final was almost cut short in the first round by Cirencester College but a second half comeback saw them come from 3-1 down to run out eventual 5-3 winners.

The team then produced a fantastic display in the fourth round to see off Yeovil College 16-0, with striker Joe Bates scoring five. Bates has led the line well throughout the competition with 11 goals but the team showed their resolve in the quarter-finals as they squeezed past Farnborough Sixth Form College on penalties.

Tassell said: “With the game being postponed for almost two months, it has been a long wait but I know all of our lads are extremely excited to finally play the game. It’s always a great achievement to make it to a final and I’m extremely proud of them.

“Our team was very inexperienced this year but they’ve grown so much throughout the season and it’s great that they’ve got a final to look forward to. We know it’s going to be an extremely tough game as, like us, Gateshead are always challenging for titles but you want the final to be fought out between two strong sides.

“Hopefully the squad can produce one more big performance on Wednesday and keep the trophy.” 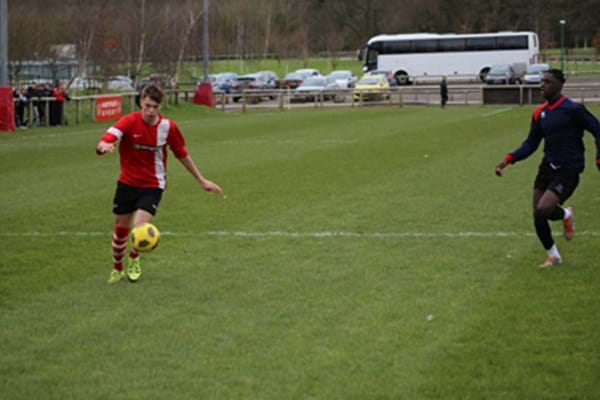