Hartpury rowing duo Frances Russell and Bryony Lawrence scooped the only winners’ medals for team GB as they stormed to double gold at the Munich Regatta over the weekend.

The girls, racing alongside Glasgow School Academy’s Alex Rankin and India Somerside, had to battle from behind with 250 metres to go to overhaul a German crew containing two junior world champions.

The crew, who had come through their heat relatively untroubled, beat the Germans into second place by one length and also saw off a challenge from a strong French crew in the final to claim gold.

With the regatta split into two events across the weekend, the girls doubled theirs and Great Britain’s gold medal haul by winning their Sunday heat by nine seconds to set the fastest time over the weekend – comfortably placing them top of the podium.

Hartpury’s rowing coach, Tom Pattichis, said: “Both Frances and Bryony have had a great season so far and they were part of a really strong crew in Munich which deserved to win gold against some very tough competition. Obviously it was a special weekend for the two of them but we still have a lot of work to do here at Hartpury with some big events coming over the next couple of months and I know they’ll continue to work hard and keep pushing for the best results.”

Russell and Lawrence have followed in the footsteps of former Gloucester-Hartpury rowers Charlotte Hodgkins-Byrne and Flo Pickles, who raced at the regatta two years ago.

Away from the Munich Regatta, former Hartpury rower Mathilda Hodgkins-Byrne was making her own waves on the international scene as she finished in first place in the B-final at her first ever Great Britain senior European Championships.

Hodgkins-Byrne, 21, who has represented GB at junior and Under-23s level, sat top of the podium for the B final – 7th overall – at her first ever senior event representing her country. The current Reading University student will now go on to race at the Olympic Qualification Regatta in two weeks’ time.

Tom added: “It’s great to see Mathilda continuing to do so well. She was hard-working and gave everything during her time here and it’s great to see her being rewarded with chances to compete at the top level. It’ll be a great experience for a young rower to take part in the Olympic Qualification Regatta and we all wish her the best of luck.” 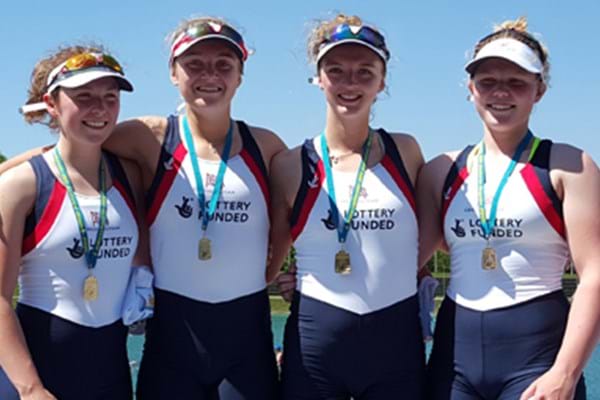