Hartpury RFC’s top try scorer, Lithuanian flyer, Jonas Mikalcius, has been snapped up by Aviva Premiership side, Harlequins, on a three-year deal.

But Hartpury will not be losing his services just yet. The 21-year-old winger, who scored 27 National League One tries this season, including five hat-tricks, is set to continue playing for Hartpury’s senior side next season while completing his Strength and Conditioning degree with Hartpury University Centre.

The first year of his Quins’ contract will be as an academy player, before moving into the senior set-up for the next two years. While he could potentially feature for the Stoop side next season, most likely in the A League or LV Cup, he looks set to play the majority of his rugby for Hartpury as he continues to learn his trade in the back division.

“It’s only my first season playing on the wing and I know I still have a lot to learn about the position,” said Jonas.

“Harlequins recognise that Hartpury and National League One are great environments in which to continue to improve my skills so they are happy to have me on loan here while I continue my studies.

“I feel I’ve had a really successful season and I’m really pleased that Harlequins have come in for me. It’s great motivation to continue to work really hard and hopefully I’ll get the chance to play for both Hartpury and Harlequins and experience playing in different competitions alongside different players.

“I know the coaches will talk to each other regularly to monitor my progress and to discuss what games I’ll be playing in. Harlequins is a great club and lot of their players are part of the England set-up. It will be great to learn from them and hopefully become a more well-rounded player as a result.”

The approach from a Premiership club that boasts the talents of such luminaries as full-back Mike Brown and scrum-half Danny Care - is just the latest instalment in Jonas’ incredible story since he came to Hartpury in 2014.

Born and raised in Šiauliai – a historically prominent Jewish settlement where basketball is the sport of choice - Jonas followed in the rugby footsteps of his father, Svajunas Mikalcius, who is a well known flanker in Lithuania.

That fact, coupled with his considerable height and size, means it’s hardly surprising that when he went to South Africa to join the Natal Sharks Academy, he already had an established pedigree as a talented back row.

At the age of 19, Jonas decided that he wanted to play his rugby closer to home, and the Lithuania rugby coach, Linas Naujalis, recommended Hartpury as offering the perfect package – an elite rugby environment in a successful University Centre where he could study for a degree in a subject he’s passionate about while continuing his rugby development.

“Everything is so carefully managed here to ensure that elite athletes can balance their studies with their sport; from training in the morning to lectures in the day, flexible support from tutors and gym work in the evening,” added Jonas.

“I know I’m preparing myself for a life after sport and I know that if rugby doesn’t work out for me, I will have the qualifications I need to work as a strength and conditioning coach.

“Personally, I love to keep fit but I also love training others and being part of their success. That’s something I’d love to be doing every day and what’s fantastic about Hartpury is being able to work with so many athletes on campus as part of my course. There’s so much talent here and I enjoy helping them to achieve their goals as well as learning so much to improve my own performance as a sportsman.

“It was difficult and tiring at first adjusting to such a packed timetable as well as trying to settle into a new community but it’s worth it for the incredible opportunities you have here. The fact I’m also now playing on the wing has also made a massive difference to how much I’m enjoying my rugby here.”

In Jonas’ first season at Hartpury, he was playing at openside flanker but, seeing his pace, strength and handling skills, the Hartpury coaches felt he could shape up to be a destructive winger. In the 2014-15 pre-season, he started this transition, and although it has been a steep learning curve, he admitted he’s never looked back.

He said: “If I’m honest, I was never really doing my job as a back row. I was standing off the rucks and mauls because I wanted to be able to run with the ball! When I first came to Hartpury and experienced the colder winters, I hated the early morning training, scrummaging in the mud, and I’d look longingly through the fence at the skills work the backs were doing.

“My dad always warned me against being a gym rat, so I’ve always trained for speed and power, which helps now I’ve made the switch, as does the fact I’d played Sevens for my country. I took the opportunity to play on the wing without hesitation as it had always been my secret dream.

“My first few games in National League One were certainly a challenge. I had the athleticism but not the experience of playing on the wing.

“The Hartpury coaches have helped me massively with that and now I feel a really key part of the team. In fact, it’s hard to think I was ever a back row. I feel like I’ve been playing on the wing for a long time and scoring tries is a great feeling too!

“It’s obviously helped to raise my profile too and I’m delighted now to be have signed for such a strong Premiership club. I’ve been to their training base in Surrey and it’s amazing. There’s a fantastic sports centre with swimming pool and a great gym, plus I’ll be near to London, which I’m looking forward too.

“I know that coming to Hartpury has played a big part in this opportunity and I was really proud to show the place off to my parents when they made their first visit to England recently. They have never seen me play here and they were blown away by the facilities and how beautiful the campus is. They didn’t stop taking pictures!” 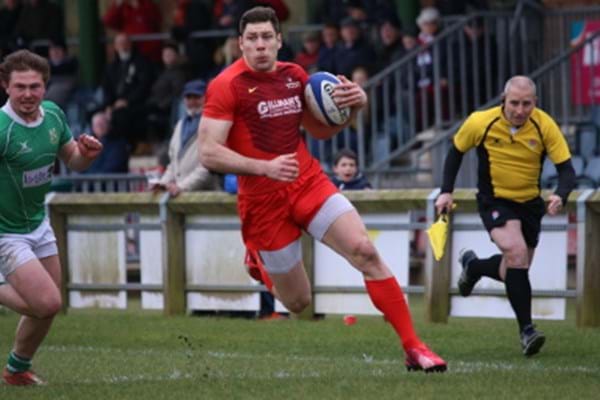