Hartpury’s Caitlin Evans-Brand produced a fantastic two-round showing at the British Schools and Colleges Tour (BSCT) National Finals to secure the girls’ individual title and steer the college’s B squad to team triumph.

The 16-year-old shot a seven over par score of 153 over the 36-hole competition to finish one shot clear of her nearest rival and also helped the B team to a 13-shot win in the nett leaderboard.

Evans-Brand was joined by the ever consistent Will Icke, Liam Williams, Lewis Bullard, Reece Swain and Amy Boote to fire an outstanding 19 under par team total in their final round at Trevose Golf and Country Club, North Cornwall, to secure team success for the first time in the nett event at the BSCT final showpiece.

Hartpury’s A team produced a strong defence of their title with a third place finish in the gross leaderboard, while Alex Chalk finished just four shots behind the overall winner with a one over par score to finish in 10th position.

In a 119-strong field, Hartpury’s Frankie Lin finished in a tie for 15th place after a four over par score in the tournament. The A team actually shot a better combined total than last year’s team, who secured the gross title off the back of Joe Harvey’s individual title success.

Rich King, Hartpury’s Golf Manager, said: “The whole team put in a really strong performance and I’m absolutely delighted for Caitlin, who played very well in both of her rounds.

“To perform so well at a championship golf course shows how far our golfers have come during their time here and securing another national title for the Hartpury collection is a deserved reward for their commitment and talent.”

Evans-Brand is back in action at the end of May in the South West Championships at Royal Winchester Golf Club, Hampshire, and she will be joined by fellow Hartpury golfers Boote, Swain, Williams and Matt Cradock as they bid to qualify for the National Schools Championship in June. 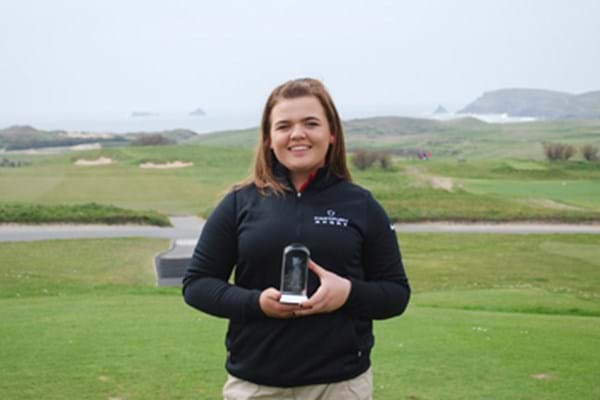