Despite some fierce resistance from Truro, Hartpury Under-18s rugby second team displayed great character and grit to grind out a victory in the AOC British Colleges Premier Cup final.

The 23-12 victory over a well organised Truro team capped a great season for the team, who finished top of the British Colleges Elite Premier League, having lost only one fixture.

With the wind behind them, Hartpury raced ahead with two impressive tries from winger Cameron Tucker-White and a penalty from captain Dan Cole to lead 13-0.

However, facing a well organised and committed Truro defence, Hartpury found themselves under pressure heading into the last 15 minutes of the first half. They managed to stand firm until the closing minutes where, after a defensive line-out, Truro were the first to pounce on a loose ball for a converted try to cut the gap to 13-7 at half-time.

Hartpury started the second half back on the attack, stringing together multiple phases and looking in control with the ball in hand, but they could not convert this pressure into points and a confident Truro hit back with attack after attack, pinning Hartpury in their own half for much of the next 20 minutes.

Influential hooker Jacob Parker was then forced off the field with injury, and although Hartpury showed real steel to hold firm in defence, Truro eventually scored a try off the back of a driving line-out to make the score 13-12 going into the final 10 minutes.

Scrum-half Ollie Moore came on and brought increased tempo to the attack and this, combined with some strong ball carrying from Jack Daynes and Kyron Fine, saw Hartpury push back into the Truro half.

A loose kick from Truro was picked up by the back three and passed to Alex Forrester, who eluded the Truro defence to run in from 40 metres and score; Dan Cole adding the extras.

Heading into the final minutes, replacement Robbie Forbes made sure of the win with a 30-metre drop-goal and the Hartpury rearguard held to deny their Cornish opponents a consolation score.

Hartpury second XV coach and Sport lecturer, Tim Brockett, said: “To win this competition is a fantastic achievement and demonstrates the strength in depth we have in our playing squads at Hartpury.

“It’s been a hugely successful season for the second XV, who have been very successful and we have competed against a number of colleges’ first XV squads. It was tough for the coaches to select a team for the final because everyone has been training and playing so well.

“There is a high level of competition for places and lads from the squads below have been pushing hard to be in contention for selection. This win is as much testament to the players who didn’t quite make the final squad as the lucky ones who lifted the cup.” 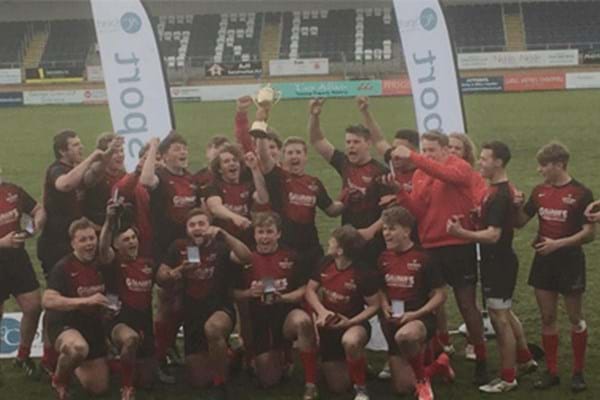