Each year eight 'second tier' rugby nations vie for the Junior World Trophy, with the winners joining the Six Nations and the southern hemisphere 'super-powers' for the annual Under 20 Junior World Championships.

The 2016 JWT has just concluded at the Harare Sports Club in Zimbabwe and a little piece of history was made by Hong Kong, who scored their first ever JWT victory by beating the hosts in a pulsating encounter which ended 40-44.

Pulling the strings behind a physically smaller but hard-working HK pack was the familiar face of scrum-half Jack Combes, whose neat service and unflappable demeanour was one of the key factors in the unexpected victory.

He also managed to sneak over over for his side's fifth try after surprising the home defence with a smartly-taken tap and go.

Combes, 18, was born and brought up in Hong Kong before coming to Hartpury to join a BTEC sports programme in 2013. During his initial two years at the College he played AASE rugby, before enrolling on a BSc in Sports Coaching for the current academic year.

Having played age-grade rugby for HK previously, he also had a spell with Ireland U-18 before taking the opportunity to switch back to his country of birth for the JWT tournament.

Of the tournament overall, Jack said "It's been a once in a life-time opportunity. It's not every day you get the chance to travel to Africa and experience something like this".

The match itself was a cliff-hanger, with HK racing into a 44-28 lead in a frantic first half before producing an all-out rearguard effort to hang for the win.

"It was one of the hardest games of my life. It was my first 80 minutes for about six weeks because of my knee and I was certainly blowing towards the end. It was was an amazing display of attacking rugby (six points are awarded for a try at the JWT) and a great show-case for the crowd. A really good chance for all the boys to express themselves."

"It was all about running rugby on a nice firm surface - with a little bit less mud in your face than you sometimes get at Hartpury!"

"Having said that, I'm looking forward to getting back and getting involved again - it's not too long before we're back in for pre-season."

Before that the immediate future involves a flight to back to Hong Kong before and almost instant return to Hartpury - and exams.

We wish him well.

For the record, the JWT tournament was won by Samoa who beat Spain in a thrilling final to join England, New Zealand and all the others in this year's Junior World Championships, to be held in Manchester.

The final was tied at 32-32 before the Samoans snatched it with a sudden-death winning try in extra time. 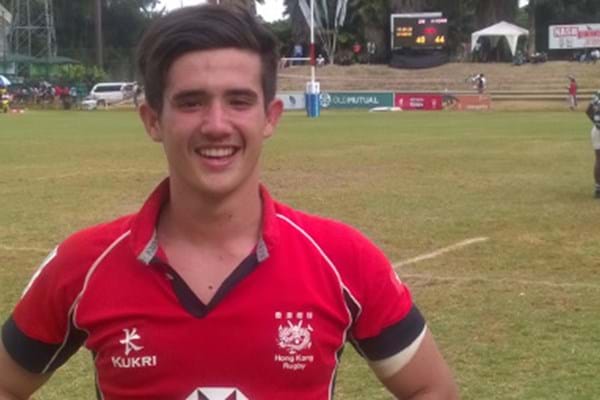