Nine current and five former Hartpury students have been named in the England Women’s Under-20s squad and the Under-18s Talent Development Group for next season.

This squad will join up with last season’s squads at a training camp in July and players will then be selected for three Tests against Canada Under-20s at Nottingham Trent College in August (18th, 22nd and 26th).

Three current Hartpury students have been selected for the Under-18s Talent Development Group, following in the footsteps of some of the College’s most famous women’s rugby products, World Cup winners Alex Matthews and Natasha Hunt and Great Britain Sevens star and Olympic hopeful, Abbie Brown, who were all part of this player pathway.

Hannah Botterman, Brooke Bradley and Alice Burtonshaw are all part of the 49-strong squad, which, for this first time this year, took part in two fixtures against their Canadian counterparts. Six girls who are currently planning to join Hartpury’s AASE programme in September are also named in this development group - Jessica Berry, Sophie Bridger, Abi Burton, Tabitha Copson, Ellie Kildunne, Sarah Kilmister and Connie Powell.

Laura-Jane Adams, who heads up the AASE Women’s Rugby programme at Hartpury, said: “It’s fantastic to see so many products of our rugby programme and stars of the future having their talent and commitment recognised by being named in these England women’s squads. It’s also a reflection of the strength and quality of our AASE programme and looking at the quality throughout these squads, its reputation will only continue to grow.

“It makes everyone at Hartpury proud that we are able to play such a key role in the development of hugely talented young players and we look forward to continue watching these girls go from strength to strength as they move forward with their international careers.” 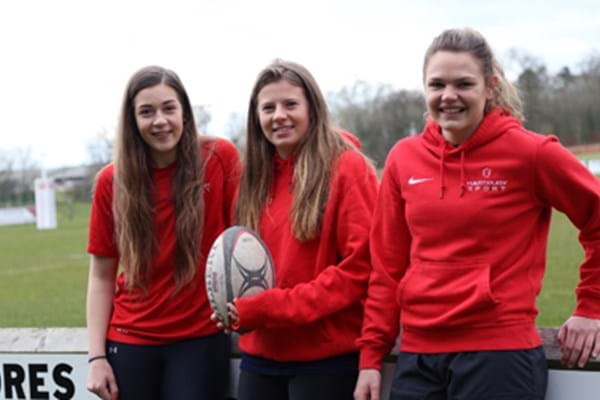