Hartpury’s golfers missed out on securing Intercollegiate Tour (ICT) National Finals success by the tightest of margins, finishing in second place in the team event.

Just two shots prevented the B team from finishing top of the nett leaderboard after the 54-hole national competition at Southport and Ainsdale Golf Club, Merseyside, as Hartpury finished below an extremely strong Balby Academy of Sport outfit for the second successive year.

The six-strong team of Liam Williams, Will Icke, Jamie Thomas, Joel Smith, Lewis Bullard and Caitlin Evans-Brand produced a consistent showing over the two days to guide Hartpury to a silver medal, while the A team just missed out on a podium place finish in the gross division of the tournament, eventually finishing fourth.

In a field of 95 golfers, Hartpury’s Rowan Warren finished 15th overall on the individual leaderboard, while Nick Ramshaw shot Hartpury’s best round of the week with a one over par score of 73 in the final round.

Rich King, Hartpury’s Golf Manager, said: “It was a major achievement to get two sides to qualify for the ICT finals for the first time in the college’s history and our B team contributed some very good scores over the course of the two days to finish in second place. The golf course was very challenging and proved even more difficult because of the conditions but they responded to it brilliantly.

“The A team didn’t quite hit top gear during the tournament but there were still some standout performances and hopefully they can build on that in our upcoming competitions.”

Hartpury’s attentions now turn to the British Schools and Colleges Tour (BSCT) National Finals this week at Trevose Golf and Country Club, North Cornwall, and they will be hoping to emulate last year’s batch of golfers, who secured the team gross title on the back of Joe Harvey’s success in the individual standings. 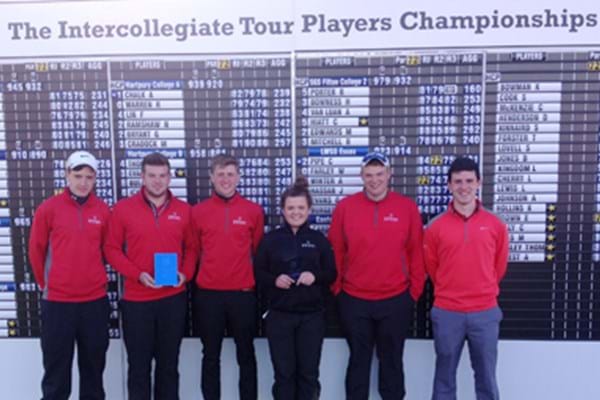