A group of Hartpury rowers added another piece of history for the college programme recently as they won racing in a four for first time at the National Schools Regatta.

A-level students Freya Webb, Alex Watson and Frances Russell alongside Sports Coaching diploma student Bryony Lawrence secured a convincing win in their first-ever competitive race in a four at the event where they’re more used to racing as a quad.

The National Schools event has proved a happy hunting ground for the girls’ crews with Gloucester-Hartpury boats having won the quad event for two of the past three years. As a different challenge this year the crew made the decision to switch to race in a four – which differs by each rower only using one oar (sweep rowing) as opposed to the two used in a quad (sculling).

The crew opened their event by narrowly winning their time trial ahead of Henley Rowing Club, who they would eventually go on to beat in the final. With both crews winning their semi-finals comfortably it looked likely the race for gold would be between the two crews but it was Hartpury who proved stronger following the halfway mark and the crew came home in a time of seven minutes 11 seconds to claim top spot.

Hartpury’s rowing coach, Tom Pattichis, said: “This is a really great result for the girls given that it’s the first time they’ve raced competitively as a four. This year is the first time any of our crews have tried sweep rowing and it’s proved to be successful so far with the girls also having secured a top twenty finish at the Women’s Head of the River where they rowed as part of an eight for the first time.”

The crew will now turn their attention to Henley Women’s Regatta where they will again race in a four before reverting back to their more usual quad for the Henley Royal.

While the girls were taking top spot, the boys quad were set a target of reaching the semi-finals which they achieved with an 11th place finish in the time trial. Despite not making the final a top 12 finish is a step in the right direction as the crew looks to qualify for Henley Royal at the end of the month. 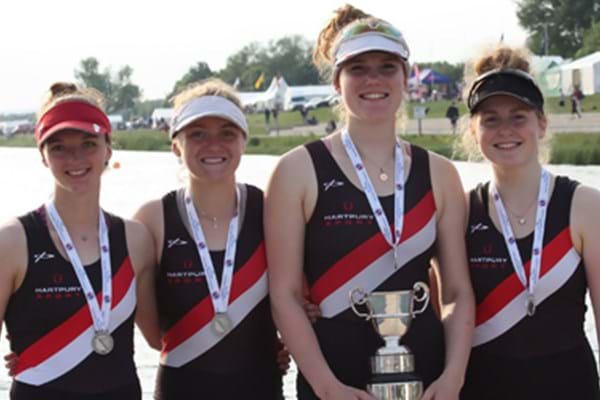