Children from local primary schools got into the sporting spirit at an Olympic taster day hosted at Hartpury.

Around 140 Reception and Key Stage One pupils tried their hand at a number of Olympic-inspired events at the annual event run by Hartpury BTEC Coaching and Sport Diploma students.

Children from Redmarley C of E Primary Academy, Highnam Academy and Staunton and Corse Academy were split into 12 teams to represent a nation as well as learning more about Olympic sports.

While some Olympic sports, like javelin, were not possible for the children, they had great fun throwing beanbags instead. They also experienced Olympic disciplines such as hurdles, shot put and a relay, earning points which led to an overall team placing.

Team England claimed gold and they were closely followed by Russia in second and the USA in third – let’s hope that medal table materialises at the real thing in Rio!

Hartpury student, Ethan Harris, said: “It’s all about having fun and getting the children here taking part in sport. A lot of them have really taken to it and it’s helped that we’ve had great weather. Everyone seems to have really enjoyed it.”

The children were also excited to meet sporting stars from the Gloucester Rugby Academy who are also students at Hartpury - Ben Vellacott, the Scotland Under-20s scrum half, and back row, Harry Wilson - as they presented the prizes.

Headteacher from Staunton and Corse Academy, Jennie Dwight, said: “Hopefully we can do this again! It was even better than last year and very worthwhile for the children to come and meet others and get experience of sports that they may not otherwise have received.”

The event not only provided a great learning experience for the children but also practical, hands-on experience of event planning for the Hartpury students, which was the culmination of months of planning and hard work.”

Hartpury tutor, Shane Duff, said: “The pupils really took this challenge on board, managing to secure sponsorship and putting on a superb event of which they should be extremely proud.”

Hartpury Sport’s, Leila Abedrabo, added: “This was the first time most of my students have been involved in anything like this and it was a tremendous learning curve for them. It will extremely beneficial for their confidence and career development.” 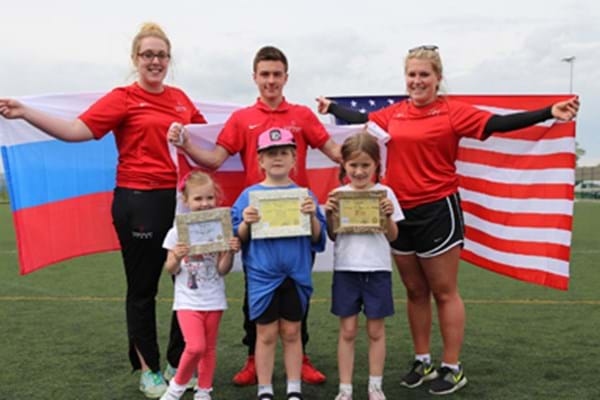