Hartpury has its first full Italy international after current student, Seb Negri, made his debut for the Azzurri on Saturday.

Only a month after Sebastian Negri received an Italy A call-up, the Hartpury RFC back row and Sports Business Management degree student made his debut for the senior Italy side, who clinched a 24-20 Test match victory over the United States in San Jose.

Called up by head coach Conor O’Shea’s last week as back and second row cover after the squad was depleted by injury, the Hartpury University Centre student claimed his first cap as he replaced Maxime Mbanda. He will now be hoping to retain his place in the squad for the next Test against Canada on Sunday (26th) in Toronto.

Flanker Negri was called into the senior squad for the first time to replace Abraham Steyn, who suffered a fracture of the clavicle in the first minutes of Italy’s 30-24 defeat by Argentina in Santa Fe – O’Shea’s first game in charge. Negri impressed in his previous two matches for Emerging Italy in the Nations Cup in Romania as they defeated Uruguay 26-24 in the first round and then went down 40-30 to Argentina A (Jaguars) in round two.

Hartpury Director of Rugby, John Barnes, said: “It’s an incredible achievement to be capped for your country and everyone at Hartpury is chuffed to bits for Seb, who richly deserved this opportunity.

“Hartpury has produced more than 100 rugby internationals over the years in various age groups and at various levels and Seb is our first full Italy cap. It’s incredible that he’s had this opportunity while he’s still a student and only a month after his surprise call-up for Italy A following an injury-hit season.

“He has clearly impressed Conor O’Shea and the rest of the Italy coaching set-up. We’re all looking forward to seeing him push on with his international career and for Hartpury next season.”

Sebastian headed into his international summer on the back of a rollercoaster 2015-16 campaign. Having won the BUCS (University Centre) first team player of the season award in 2015 and featured for Gloucester in the A League, Sebastian was named as captain of that team for the 2015-16 campaign.

However, a serious injury in an early fixture against Exeter University left him needing surgery on a torn and ruptured pectoral, cutting short his season. The Nations Cup clashes have been his first since returning from that injury.

"It's a dream to be capped for Italy and to play at this level,” said Sebastian, who came to Hartpury from Hilton College in South Africa, via a season with the Western Province Academy based in Cape Town. Although originally from Zimbabwe, he has an Italian father and hence, an Italian passport.

“The game against The USA was an unreal experience and one which I will never forget. I have been taken back by all the support shown by my friends and family and this to me means the world.” 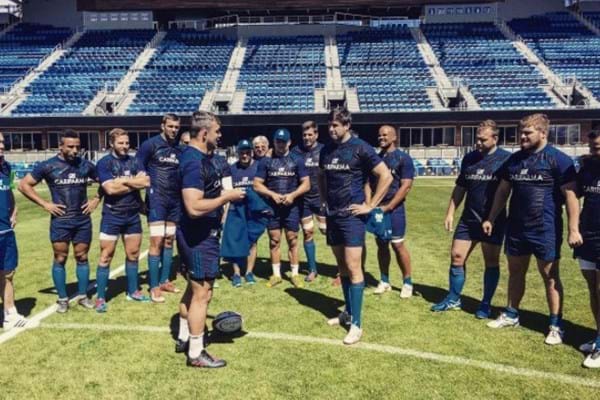