Twenty-five pupils from three primary schools - Finlay Road, Staunton and Corse and Al Ashraf – made it to the final after qualifying through earlier rounds, which were also held at Hartpury.

After a great day of golfing action which saw pupils swing for cup glory in various chipping and putting challenges, all five teams performed brilliantly. Finlay Road B team eventually held the trophy aloft, having amassed a total score of 2702 points to be crowned champions for the third consecutive year.

The final consisted of playing six holes with each team of five being split into two sets. Each set played alternate shots and points were given depending on their score. In the afternoon they played the same format as the qualifiers and all the scores from the day were added up for each school.

The competition was planned and run by first year BTEC Golf students as part of their course, and the schools were full of praise for all of the young coaches.

Jennie Dwight, Staunton and Corse’s headteacher, said: “The golf event was very much enjoyed by the children and they were kept engaged and interested throughout the day by Hartpury’s students. Our school was particularly proud to have been praised for the children’s sportsmanship and supportive attitudes and we would love to come again next year!”

Paul Johnson, Sport Lecturer at Hartpury, said: “It was a great day with lots of smiles, laughs and great golf. I was especially happy with all the teams in how they conducted themselves in terms of teamwork, encouraging others and in following instructions.

“As ever, our students excelled in coaching the pupils and were encouraging, enthusiastic and professional throughout. I’d also like to express a big thanks to Carys Williams (Hartpury Innovation Careers and Enterprise Centre administrator) who liaised with the schools and ensured everything went smoothly.”

Tri-Golf is a ‘mini’ version of golf for primary schools, which involves the use of adapted equipment and a variety of games designed to provide an enjoyable introduction to the sport. 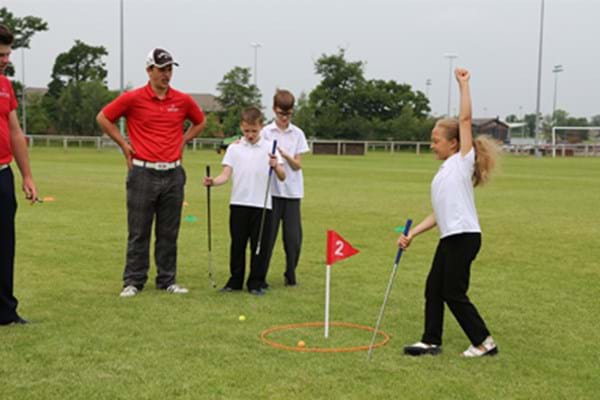