Hartpury’s rowers warmed up for next week’s Henley Royal Regatta in perfect fashion with victory at the Henley Women’s Regatta over the weekend.

The crew of Freya Webb, Alex Watson, Frances Russell and Bryony Lawrence, coxed by Rachel Holland of Gloucester Rowing Club, made it four consecutive years of success at the regatta with victory in the junior girls’ coxed four event.

As a different challenge this year, the crew made the decision to switch to race in a four – which differs by each rower only using one oar (sweep rowing) as opposed to the two used in a quad (sculling).

And the change has paid dividends for the team as they have now secured two titles in quick succession, after storming to success in the National Schools Regatta last month.

Having qualified from the time trial, the crew scored a comfortable win over St Paul’s Girls’ School in the first round before easing to victory by a healthy margin in the last eight stage against Godolphin and Latymer School.

The crew then came up against Henley Rowing Club in the semi-final, who they defeated in last month’s National Schools final, but it proved to be the toughest race of the weekend as Henley led by a length in the early stages. However, the quintet began to claw their way back through the middle portion of the race and they managed to overhaul Henley in the latter stages to win by half a length.

The final with Emanuel School saw the team row to a three-length victory, securing a fourth title in a row at the competition.

Hartpury’s rowing coach, Tom Pattichis, said: “It’s another great result for the girls and to win two titles despite only racing competitively as a four since the beginning of the season is a fantastic achievement. The whole crew showed a lot of determination throughout the regatta and deserved the win.”

There was also success for former Hartpury student Charlotte Hodgkins-Byrne, who was part of the University of London crew that won the senior coxed four event, while Hartpury assistant rowing coach Will Stockton, currently on secondment with Agecroft Rowing Club, guided their team to success in the senior quad sculls competition.

This year’s crew will now revert back to their more usual quad for the Henley Royal but they first need to progress via the qualification regatta this Friday, where they will need to set a top-seven time out of 37 crews to make it to next week’s prestigious regatta.

Should the team progress, they will join the boys’ quad crew at Henley, who will become only the second crew from this programme to compete at the event.

Pattichis added: “The Henley Royal Regatta is one of the biggest dates on the calendar so hopefully we can maintain the strong form that we’ve displayed so far in both the girls’ and boys’ quads.” 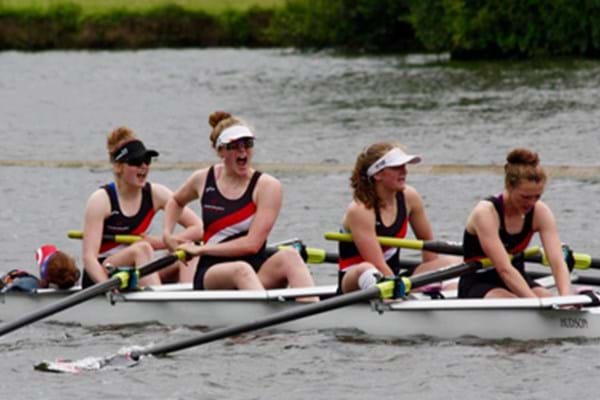