Only a month after Sebastian Negri received an Italy A call-up, the Hartpury RFC back row has been promoted into the full Italy squad.

The Hartpury University Centre Sports Business Management degree student will link up with the national team today in San Jose in preparation for Saturday's test match against the United States.

Flanker Negri has been called into the senior squad for the first time by new Italy head coach, Conor O’Shea, to replace Abraham Steyn, who suffered a fracture of the clavicle in the first minutes of Italy’s 30-24 defeat by Argentina in Santa Fe – O’Shea’s first game in charge.

Negri has impressed in the last two matches for Emerging Italy in the Nations Cup in Romania as they defeated Uruguay 26-24 in the first round and then went down 40-30 to Argentina A (Jaguars) in round two.

"Sebastian has done some excellent things in the first two games with Italy Emerging and it is right to offer him an opportunity to compete at the highest level,” said Conor O’Shea.

Hartpury Director of Rugby, John Barnes, said: “Everyone involved with Hartpury is delighted for Seb and this recognition of his talent and commitment is richly deserved. Hartpury has a proud tradition of producing internationals but Seb would be our first full Italy cap and it’s fantastic for him to have this opportunity while he’s still a student, especially after the frustrating season he’s had.”

Sebastian headed into his international summer on the back of a rollercoaster 2015-16 campaign. Having won the BUCS (University Centre) first team player of the season award in 2015 and featured for Gloucester in the A League, Sebastian was named as captain of that team for the 2015-16 campaign.

However, a serious injury in an early fixture against Exeter University left him needing surgery on a torn and ruptured pectoral, cutting short his season. The Nations Cup clashes have been his first since returning from that injury.

"This year has certainly had its ups and downs,” said Sebastian, who came to Hartpury from Hilton College in South Africa, via a season with the Western Province Academy based in Cape Town. Although originally from Zimbabwe, he has an Italian father and hence, an Italian passport.

“I was very proud to be named captain of the university first team and devastated to sustain a serious injury so early in the season. It has been a long and hard four to five months of getting back fully fit but I have been very lucky to have great support from the Hartpury medical staff and conditioning coaches, as well as all my team-mates.

“I was on my day off yesterday in Bucharest having a meal with my dad when the news came through. I was in so much shock and still am as this is a dream come true!

“It was awesome playing the first two games for the Italy A side and I now miss the last game to join up with the Italy team in San Francisco. Even if I don't play, just to be around the squad will be an unreal experience. I am honesty lost for words and I am truly humbled. The support everyone has given me is incredible and it's safe to say nothing has sunk in yet!

“Hopefully this sets a great platform for my final year at Hartpury, which I am very much looking forward too.” 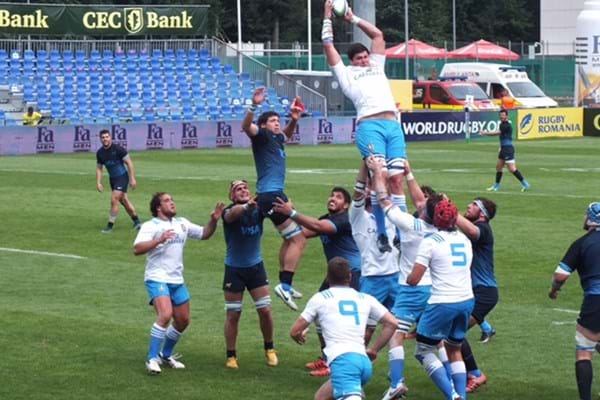