Great Britain team stalwart Carl Hester finished off the Festival of Dressage with a bang as, with his Olympic ride Nip Tuck, he won the last class of the day by more than 10%.

Carl, who is one of the Hartpury Equine Academy coaches, completed a lovely test to finish top of the podium on 79.216%.

The last freestyle class of the Festival was the CDI Intermediate I, which saw some stunning tests to imaginative music. Rebecca Jane Edwards won the class with Don Archie on 75.725%, second was Claire Moir and Davenport Bewes with 74.775% and finishing off the top three was Gemma Maddocks and El Paso Van Overis on 74.100%.

In a large Fairfax FEI Prix St Georges class Kate Cowell, directed Barcelona to win on 73.15%. Coming in just behind was Hannah Biggs aboard Don Caledonia with 72.28% followed by Claire Able and Rowan Magic on 70.04%.

Outside, the action started with the FEI Intermediate II, which saw Becky Moody and Carinsio take the lead halfway through the class with a score of 70.307%. Michael Eilberg with Furst Sinclair came second with 69.078% while Emma Blundell took third with Keystone Darling on 67.770%.

Kicking off the final day of competition indoors were the Hickstead age classes. Matthew Burnett ruled the 5 Year Old National and International classes, winning both with Grisbimone on scores of 7.8 and 7.6 respectively. He then took both second spots aboard Gino with 7.64 and 7.54.

Scooping third in the National class was Sarah Williams and Bellas Dream with 7.12 while Ellie Worrall and Rouven claimed the bronze spot in the International class with 7.26.

In the Hickstead National 6 Year Old class, Willow Kemp rode Dark Horse into first place with 7.74. The scores for second and third were not far adrift as Lucinda Elliott and Mount St John Best Of All received 7.32 and Andrew Harris and Freya F.S.T 7.26.

Andrew Harris and Freya F.S.T moved up a placing for second on 7.1 in the International 6 Year Old. They were narrowly beaten by Leah Beckett, who rode Woodcroft San Leonardo to win with 7.46.

The indoor arena also hosted the British Dressage Young Pony Finals. De Votion, ridden by Annie Lloyd-Aylett, was the overall best scoring pony and won the 4 Year Old class with a score of 8. Charlotte Drakeley and Woodlander Sir Gorgeous were second on 7.42 and Vanessa Haunch and Bunbury Peppermill third on 7.14

Woodlander Wagalina took first for Rosie Morgan on a score of 7.56 in the 5 Year Olds. With extremely close scores, second went to Alice Hurley and BKs Cleopatra on 7.52, who just got in front of Millie McBride and Bounty on 7.40.

The 6 Year Old class went to Samantha Sargeant-Smith on Dylano Du Bois on 7.08. Georgia Stokes and Niki Tottman came joint second on SOS What Apricot Want and Chocolatier Delux with scores of 6.86. 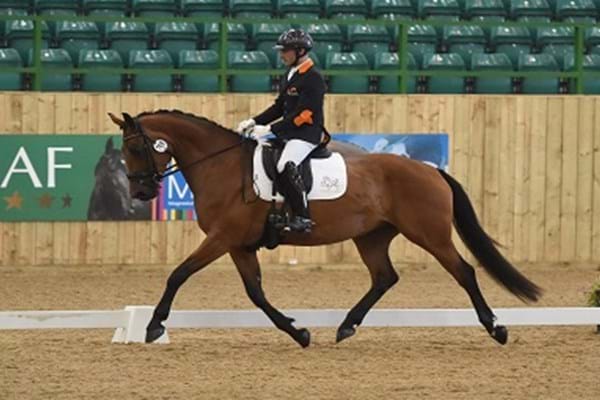