Woodlander Farouche continues to wow the crowds, making it two from two when winning her second class on the fourth day of action at the Hartpury Festival of Dressage.

The mare leapt into the limelight as the first British-bred horse to win the World Breeding Dressage Championships as a five-year-old and has gone from strength to strength since. Ridden by Michael Eilberg, from the Eilberg dressage dynasty, the duo received 76.632% in the Shadow Horse FEI CDI Inter I – more than three per cent clear of Thomas Goode and Dior with 73.421%. Sealing a Great Britain top three was Claire Moir on Davenport Mewes with 69.526%.

The day kicked off with the Shearwater Young Dressage Horse Semi-Finals, setting a trend for the day of very few marks separating the top spots with the age classes being no exception. In the 4 Year Old class, Darren Hicks and Hennessy T took the lead with 8.14, Charlotte Dujardin and Mount St John Forever claimed second with 8.08 and Sonnar Murray-Brown and Tomoko completed the top three with 8.

The 5 Year Old class was extremely tight as Charlotte Dujardin and Mount St John VIP claimed a very narrow win over Natalie Banks and Giloma, scoring 8.64 and 8.58 respectively. Rebecca Hughes and Classic Goldstrike were not far behind with 8.14 for third spot.

In another very close scoring class, Gareth Hughes and Sintano Van Hof Olympia clinched the 6 Year Old honours with a score of 8.48. Dujardin finished in the top three again, this time aboard Florentina, with 8.3 and Caroline Church with San Marco rounded off the top three on 8.12.

The ponies had their chance to shine in the Speedskip FEI Pony Team Test in the Hartpury Arena. Sophie Taylor rode Madam’s Miss Maria into the lead with 71.94%. Second place went to Lara Kurpatwa on her first ride, Le Chiffre, with 71.41% whilst third went to Isobel Lickley and Gigolo on 70.45%.

In the afternoon’s action, a chance to compete at tonight’s Gala Evening – the pinnacle of the Festival of Dressage – was the prize on offer to the best riders in the BYRDS A Squad Ride Off.

The BYRDS Inter-Regional event took place recently with teams of riders from regions all over the UK competing. Today, the top nine riders from the A squad competition competed in groups of three, all riding each other's horses. Assessed by Becky Moody, she then selected the top three riders to ride completely new and unfamiliar horses in the final.

The three riders that went through to the Gala Evening were Emma Jones representing Wales, Holly Colgate Hardaway from the Southern region and Emily Watts from the North West. In the gala evening final, Emma took top spot with Emily second and Holly third. 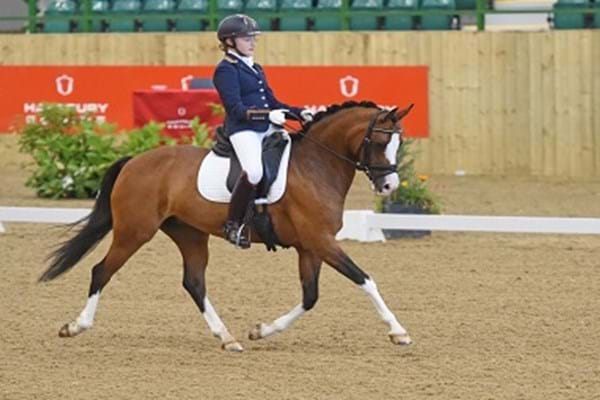