Hartpury’s momentum on the water is showing no sign of slowing after the rowers secured their fifth national title this season.

The girls’ quad, made up of Freya Webb, Zoe Adamson, Rosie Gladding and Alex Watson, sailed to success in the British Rowing Junior Championships at Nottingham last weekend, securing an England call-up in the process.

Rosie and Alex were drafted in to replace Bryony Lawrence and Frances Russell, who helped secure a historic hat-trick of consecutive Henley Royal Regatta wins alongside Freya and Zoe with success in the junior girls’ quad sculls. Bryony and Frances are currently involved in the Great Britain junior team selection process.

The new crew didn’t take long to get into stride as they posted the fastest time in the time trial event before making light work of their opponents in the semi-final. The team then produced a similarly strong performance in the final, where they saw off Warrington Rowing Club to secure the spoils.

And they will now represent England at the Home International Regatta this weekend (23rd July) in Cardiff- the third time that the Hartpury programme has been selected to represent England in the junior women’s quad. They will be hoping to produce the same results as past Hartpury crews who have participated in the prestigious competition, who took the gold medal in 2013 and 2015.

The female quartet will be joined at the Home International Regatta by Scott Jones, with the Hartpury student selected as England’s representative in the arms and shoulders Paralympic category after a trial last weekend.

Hartpury’s rowing coach, Tom Pattichis, said: “It’s been a busy period for everybody involved in the rowing programme recently. The results at the weekend are proof of our impressive strength in depth and hopefully we can produce a similarly strong performance this weekend.” 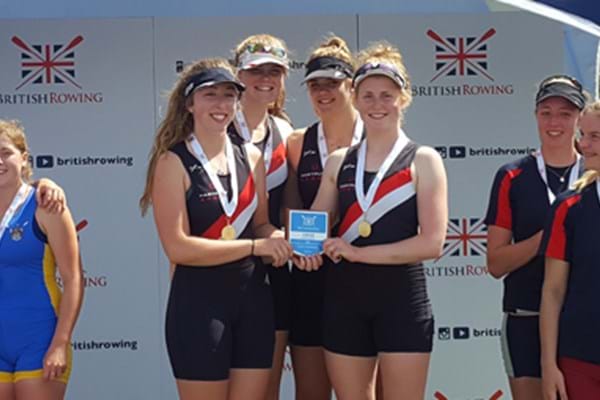