A Hartpury student has shown athletic ability to match his agricultural acumen after competing in the English Schools’ Championships.

Michael Dawes, a 17-year-old who has just completed his first year of the BTEC Level 3 Extended Diploma in Agriculture at Hartpury, finished in a creditable 10th place in the hammer discipline at the national competition held in Gateshead last weekend.

And the feat is even more impressive considering Michael only took up the sport two years ago.

“I started athletics when I was around 11 years of age and tried my hand at most events,” he said.

“I originally specialised in discus but I then discovered hammer throwing and realised that was where my talent lay.”

Michael qualified for the final showpiece after securing first place at two competitions last month- the Gloucestershire Schools’ and South West Schools’ Championships respectively - taking on other athletes who were up to two years older than him, with a throw of 51.56 metres in the latter event.

And he increased his throw by almost two metres at one of the biggest junior athletic events on the calendar to provide a platform for him to build on in upcoming competitions.

He said: “As a younger athlete in the age group, I knew it would be a challenge but it was a good experience and I can feel myself getting stronger with each event so hopefully I can continue to progress.”

Although Michael’s course involves a packed academic programme and working on the college’s commercial Home Farm, he still finds time to train and fine-tune his technique for future competitions.

He added: “I have found my first year at Hartpury extremely enjoyable and it’s been a really good experience so far, despite the long hours! I have been training in Gloucester once a week while I have also been playing rugby for Warwickshire Under-18s and that’s been really useful in helping to build the strength and fitness required for hammer throwing.

“I would love to go as far as possible in athletics and continue to progress in the hammer discipline. Hopefully that will happen but I also know that my course at Hartpury will allow me to work at my family’s dairy farm and drive it forward so it’s nice to have a couple of options!”

There was further Hartpury representation at the National Schools event with recent college completers, Catherine Hardy and Chris Bell-Hartley, competing in the 100m and 400m respectively. 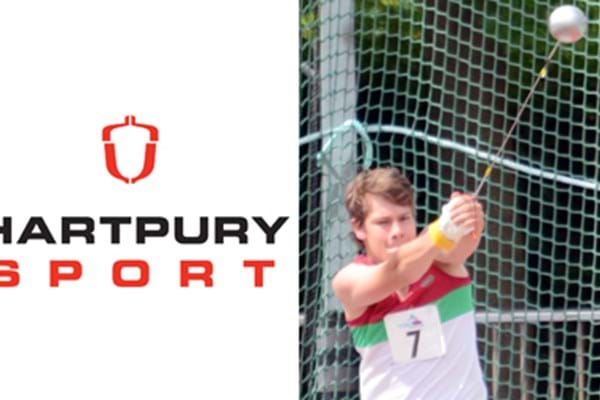