Olympic gold medal hopes Charlotte Dujardin and Carl Hester have hailed the Hartpury Festival of Dressage as the perfect preparation for Rio 2016.

The dressage superstars both lit up the Festival stage with a series of stunning tests to clinch emphatic victories in a host of classes, and more than 50,000 people from 26 countries tuned in to watch the action on the livestream – a record for equine events livestream providers Goldeneye and 15,000 more viewers than in 2015.

The duo scored an incredible 90.625% with their Rio Carnival-inspired test that they will perform in Rio - an amazing 17% ahead of second place. Valegro even made the most of his extended Hartpury holiday by having a cool down in the water treadmill at the Equine Therapy Centre on Sunday morning, where he visits at least once a week in the run-up to major competitions.

He said: “Hartpury delivered a spectacular show for Great Britain team members to practice their Rio preparations. We’re really grateful that the footing was perfect, the stabling is fantastic and the organisation and friendly atmosphere is making it one of the premier events of the country.

“At Hartpury, we are blessed with amazing surfaces and there are very few shows that you can go to in the world now that can boast these sort of facilities and permanent stabling. I would like to say thank you to Hartpury for hosting this.

“I mean, most horses are stuck to the bottom of it whereas his legs come out of the top of it. It does do amazing things for his back when you see him walking on it.

“The Hartpury Festival of Dressage and Hartpury generally is certainly somewhere we would always come back to. Although everyone thinks it’s just because we live 10 minutes away, it’s actually the facilities and the whole package that makes it worthwhile for us.”

This year’s Hartpury Festival saw more than 300 riders from around 19 nations competing in more than 40 dressage and para-dressage classes over five days of outstanding equestrian sport.

Other stars of the Festival were crowd favourite Michael Eilberg on Woodlander Farouche and Charlotte and Carl’s fellow Olympic dressage team members, Spencer Wilton on Super Nova II and Fiona Bigwood on Atterupgaards Orthilia. All four of the Rio 2016 team performed on Festival Friday in the Horsescout.com CDI Grand Prix and filled the top four spots.

While the livestream was hugely popular, others kept up to date with all the action on the new website and the Festival’s Facebook and twitter pages. Almost 6000 people have already watched Hartpury video of Great Britain’s London 2012 gold medallist, Dujardin, from Newent, winning the Horsescout.com CDI Grand Prix on Valegro.

Charlotte said: “It’s super to be riding here at Hartpury. The atmosphere is always fantastic and so is having all this support. It’s a lovely show and a lovely venue to ride. It really it makes it so enjoyable when you come and you’ve got a place with facilities like this.

“Plus it’s only down the road so it’s the perfect prep for Rio for me. Every year, this is my final run before a major championship. I love coming here and it’s always a pleasure.”

There were also many exceptional performances from international para riders, who were staking their final claims for selection for the Rio Paralympics. Sophie Wells and Natasha Baker both completed an astonishing clean sweep of class wins on all three days of the Festival in the Grade IV and II respectively to help Great Britain to an emphatic team title victory.

Hartpury’s own up and coming dressage stars, including Equine Academy members and current degree students, Lucy Pincus and Francesca Bradley, also put in encouraging performances and gained valuable experience at the highest level.

Philip Cheetham, Hartpury Equine Director, said: “With record entries and so many fabulous performances, not least from our Great Britain Olympic team, we were delighted to have been able to share them with a much bigger audience this year.

“As well as the record number of livestream viewers, our social media and web updates showcased the best of the para dressage and the able-bodied dressage, sharing the stories and the results of our fantastic competitors.

“From competitors, owners, grooms, sponsors and the general public, we have had so much positive feedback about the quality of the facilities and competition.

“The support of our sponsors is absolutely crucial to the continued success of the Festival and a big thank you goes to them as well as to all the Hartpury staff and students who gave up so much of their time and worked so hard to make this year’s Festival such an outstanding event.” 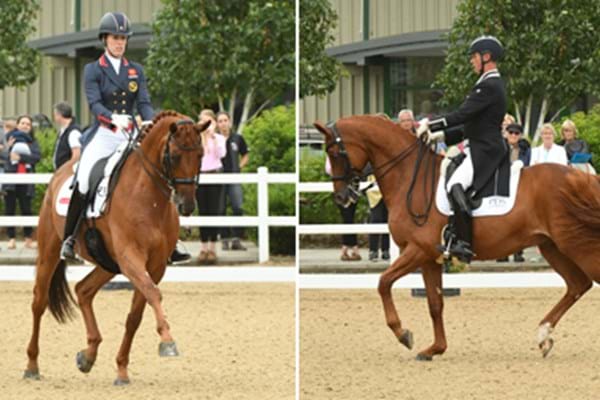