The Great Britain dressage team heading to the Rio Olympics will all perform at this week’s star-studded Hartpury Festival of Dressage.

The Festival, which runs from July 6th to 10th, will be the final competition before the 2016 Olympics in Brazil both for Charlotte and World Freestyle record holder Valegro and for fellow Great Britain dressage star, Carl Hester MBE, and Nip Tuck.

Spencer Wilton and Fiona Bigwood will also compete at the Festival on Super Nova II and Atterupgaards Orthilia respectively. Spencer and Fiona will make their Olympic debut in Rio, having been named in the final GB team of four for Brazil today.

Charlotte will warm up for her bid for Olympic glory by performing in the NAF Superflex Grand Prix Freestyle at Saturday’s gala evening (July 9th). The gala evening is always the highlight of the Festival, with 800 spectators watching outstanding dressage action in an electric atmosphere. While it is now virtually sold out, you can catch all the action on the livestream on www.hartpuryfestivalofdressage.co.uk

Tickets are still available for all of the other days, including Friday (July 8th), when both Charlotte and Carl will perform in the Horse Scout CDI Grand Prix, starting at 2.30pm. Carl and Nip Tuck are also entered for the Baileys Horse Feeds Grand Prix Special on Sunday, July 10th, starting at 3.45pm.

And both Charlotte and Carl have appealed for the crowds to come out in force to help create an Olympic atmosphere for the Team GB competitors and their horses.

“Both Charlotte and I love performing at the Festival and the spectators and support staff are always fantastic,” said Carl.

“There’s always a very special atmosphere and it would be fantastic to see the banks packed. It would be the best possible preparation for the horses to perform in front of a lot of people, as they will in Rio, and it’s a great opportunity for people to show their support for Team GB ahead of the Olympics.”

Hartpury’s Elite Dressage coach, Carl Hester MBE, is also Charlotte and Valegro’s coach and mentor, having nurtured their talent from their very first competitions together.

Charlotte and Valegro, who are based in Newent, were double Olympic gold medallists at the London 2012 Olympics. Since then, they have amassed an impressive tally of medals, including becoming 2014 Individual Grand Prix Special and Grand Prix Freestyle World Champions, winning Team Silver at the 2014 World Equestrian Games and gold at the 2014 and 2015 Dressage World Cup. They have also claimed three World Records.

Both Charlotte and Carl put in star turns at last year’s Hartpury Festival of Dressage, when record entries saw more than 400 riders from 17 nations compete in more than 40 dressage and para-dressage classes over five days of outstanding equestrian sport.

Valegro is a regular visitor to Hartpury to use the hydrotherapy treadmill at Hartpury’s Equine Therapy Centre. He is brought by his groom, Alan Davies, several times a month as part of his normal regime, increasing his visits to twice a week in the build-up to competing at major events.

Charlotte said: “We love Hartpury. We’re so lucky to have a facility like this so close by and it’s such a super show; we look forward to it every year. The people behind the scenes here are incredible and so are the facilities.”

Phillip Cheetham, Equine Director at Hartpury College, said: “We are thrilled that all of the Team GB riders and their phenomenal horses are making the Hartpury Festival of Dressage such a key part of their build-up to Rio.

“We’re hoping for big crowds to cheer them on and give them the best possible chance of going for gold in Brazil. To have the chance to watch the very best in the world at our unique venue is an opportunity not to be missed!”

Find out more and book your tickets at www.hartpuryfestivalofdressage.co.uk 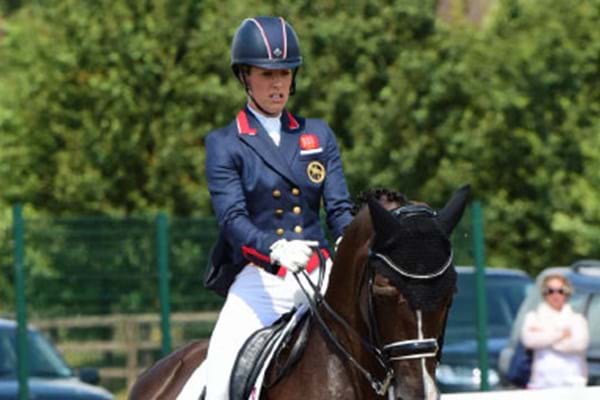