Team GB's fantastic four stole the limelight on the third day of the Hartpury Festival of Dressage, proving their red-hot form in the run-up to Rio.

The quartet selected to represent Great Britain in the dressage in the Olympic in Brazil took the top four places in today's Horsescout.com CDI Grand Prix.

Charlotte Dujardin, the London 2012 double Olympic gold medallist from Newent, finished top of the pile on Valegro with 83.28% and you can watch her winning test here. Her mentor and Hartpury equine academy's elite dressage coach, Carl Hester, was second on Nip Tuck with 78.2% (watch his test here), while Spencer Wilton was third on Super Nova II with 77.5% and fourth was Fiona Bigwood, who scored 75.14% on Atterupgaards Orthilia.

The outdoor arena saw the start of the Hartpury Equine CDI3* with the Prix St Georges this morning. Great Britain took the podium places as Michael Eilberg and the renowned Woodlander Farouche stole the show with 77.447%, Thomas Goode rode Dior into second with 73.395% whilst Rebecca Jane Edwards and Don Archie took the bronze spot with 73.158%.
Day three also saw the final Hartpury-sponsored international para dressage competition of the festival as the riders battled it out in their freestyle tests. They kicked off the day indoors to complete their tests to music.Natasha Baker sealed off her campaign in fine style, flying into top spot in the Grade II with a huge 79.15%, smashing her scores of 74% so far.

She said: “It’s been a consistent year, every competition I’ve been to its been 74 or 75. I’m really, really happy. The walk felt amazing but the trot felt a little bit flat. I think three days in a row and then going from outside to inside makes a big difference. I had no medium trot whatsoever today but I kept the rhythm and harmony and I love riding to music - its my favourite!"

Erin Orford with Dior and Suzanna Hext and Abira again completed the top three with 74.60% and 72.65% respectively.
At her last chance to steal a win, Natasha Adkinson just pipped Lee Pearson and Zion’s 74.80% on Sweet Caledonia with 75.60% in the Grade 1a. Laura Lee rode into third place aboard Midnight II with 72.80%.

Natasha said: "I could not ask for more of my horse. Callie went in there and coped with the atmosphere and she produced the most fantastic test. It was an incredible score, one of my best."
Anne Dunham also made it three from three, winning her freestyle with 77.40% on LJT Lucas Normark. Sophie Christianson again took second spot on Janerio 6 with 75.80% and Sergio Oliva completed the top three with Coco Chanel on 72.85%.
Anne said: ““It’s been lovely to see all the work that everyone has put in paid off. He’s been to stay at Talland twice and we’ve come here from there and pushed it a bit harder this year in terms of the training schedule and it seems to have paid off. I’d certainly do it again this way if I get the chance - it’s great.”
The Grade III saw another win for Nicky Greenhill and Gregorian Chant with 76.35%, second for Izzy Palmer and Pinnochio with 74.90% while Deb Criddle and LJT Akilles came in for third on 73.95%.
Sophie Wells had a dream ending to the festival, again winning the Grade IV with a whopping 80.70%, nine per cent ahead of the rest of the field. Thiago Foncesca and Win Du Vieux Logis scored 71.35% for second while Charlotte Cundall and The Chenko Artist achieved 69.60% for third.
It was a fabulous festival for the Great Britain para dressage stars putting in a last bid for selection for the Paralympics in Rio and they emphatically scooped the top spot of the team competition.

While tickets for tomorrow’s gala evening are sold out, there are still tickets left for the two remaining days of outstanding equestrian at the Hartpury Festival of Dressage. Day entry is £6 per person on July 9th and 10th. Under-16s go free on all days. Parking is free on all days. 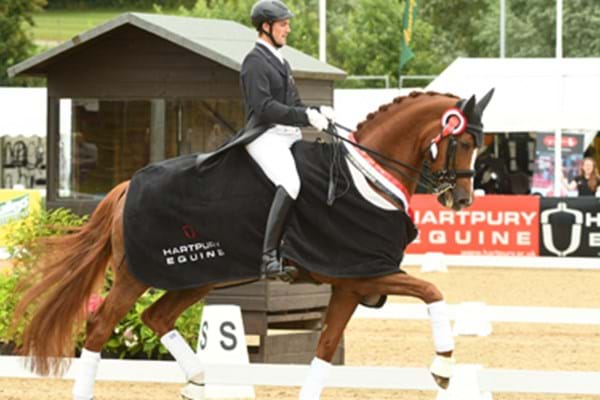