Josh Miller and Harry Sykes signed off their season in style as the pentathlon pair were crowned men’s relay champions at the Under-19s European Championships.

The duo’s result was the highest achievement of any Great Britain youth modern pentathletes on the international stage this summer. Having found themselves in second place following the swim and fencing rounds, the pair needed a strong finish in the combined event to ensure they topped the podium.

Hartpury’s Modern Pentathlon coach, Mat Dewey, said: “This is a fantastic achievement by both boys and obviously it’s great to see a Hartpury pair finishing in the top two. They worked really hard to battle back from behind to win.

“They’ve both had a great season and this result really tops it off. It was the best result by any Great Britain youth team member internationally this summer, which is some achievement!”

Following the morning’s 2x100m relay, the GB pair sat in second place going into the fencing. Having been split during the fencing round, their individual results saw them maintain second heading into the combined event.

With staggered starts based on position heading into the event’s final part – a 2x800m run with a shoot in between – the pair were forced to come from behind in order to secure the gold medal position.

The result tops off an amazing period at Hartpury for the duo with both having achieved a high level of international success over the last two years. Sykes picked up bronze medals as part of GB teams at the Olympic Hopes and Saint Boi International Under-19s competitions. He was also selected for Great Britain Under-21s and took part in the Modern Pentathlon World Championships. 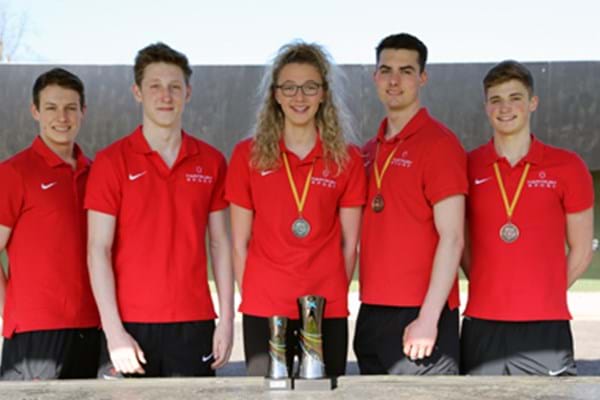