With Rio 2016 such a rip-roaring success for Great Britain, a Hartpury Animal Management graduate has her sights fixed on securing her very own Olympic success in four years’ time.

Mollie Courtney, an up and coming hurdler from Tewkesbury who has just completed her BTEC Level 3 Extended Diploma in Animal Management at Hartpury, is hoping that her burgeoning athletic career will continue to rise, culminating in an appearance at the 2020 Olympic Games in Tokyo.

“If I keep doing what I doing then I’ll be giving myself the best chance of making it happen but it’s amazing to think that in four years I could be competing on the biggest stage in the world,” she said.

The 18-year-old has produced a fantastic season on and off the track, smashing her personal best in the 100 metres hurdles while also achieving a triple Distinction in her studies. She was also awarded the Ian Waterhouse Cup for Sports Person of the Year at Hartpury’s Further Education Prize Day.

Ranked number one in the UK and 10th in the world for the Under-20s 100m outdoor hurdles, Mollie secured her place in the Great Britain team for the World Junior Championships in Poland, where she narrowly missed out on a place in the final after posting a personal best time in her heat.

Despite finishing third in 13.42 seconds during her semi-final she was edged out as a fastest runner up by just 0.07 seconds.

She said: “It was great to secure qualification for the competition and it was disappointing to come so close to the final but I’m confident that I’ll have more chances to get to more major finals and prove that I belong in that company.”

After smashing her personal best to win the 100m hurdles in 13.32 seconds at the Loughborough International Games and achieve the qualifying time for the Worlds, she made her selection secure at the trials at the England Championships, where she finished second despite hitting a hurdle.

Mollie achieved a silver medal in the 100m and the high jump at the same competition in 2015 - jumping 1.74 metres when she is only 1.69m herself! She currently ranks equal fifth with Sally Gunnell in the all-time records for the 60m hurdle - 11 places above Jessica Ennis-Hill – and fifth of all time for the outdoor 100m hurdle.

Mollie added: “I wasn’t expecting to produce a PB at all and I can’t really remember the race that well as it was a bit of a blur! My coach said that is the sign of a good race so it was brilliant to do.

“It feels great to be ranked as number one in my age group and to run a time that is in a similar bracket to stars like Jess Ennis-Hill and Tiffany Porter is pretty surreal. I competed in the same event as them a couple of years ago and I was in awe of them!

“I remember watching them up close and even warming up with them and it’s really interesting to see how they approach things before getting on to the track.”

Despite training commitments over every day of the week, Mollie combined her other passion of animals to maintain a high academic standard throughout her time at Hartpury.

She said: “I’m training so much but it is 100% worth it. There are times that it’s difficult to balance both my studies and my athletics but I want to do as well as I can in both so I wouldn’t change anything. I’ll be sad to leave Hartpury, it’s been the best two years ever! I’ve loved everything about it; the lecturers, the course. It’s everything I wanted and has been perfect for me.”

After her World Junior Championships bow, Mollie will be heading to university to study animal biology but that doesn’t mean she hasn’t set herself another athletic goal to achieve in the meantime.

“Hopefully I can put in a really strong showing in Poland but my next big target is to qualify for the 2018 Commonwealth Games in Australia,” she added.

“I know that some athletes can drop off a bit between the age I am now and Under-23s level so hopefully I can continue to improve and bridge the gap between the age groups.” 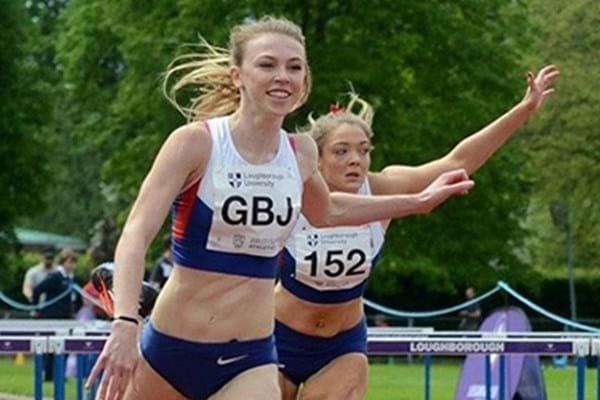