While Mathilda struck gold in the Under-23s Women’s Double Scull with Jess Leyden at the World Rowing Championships in Rotterdam, finishing an outstanding six seconds ahead of the rest of the field, Charlotte was part of the Under-23s Women’s Eight that picked up the silver medal alongside two other former Hartpury students, Alice Bowyer and Chloe Brew.

“I can’t believe how well it worked out,” said Mathilda. “This was my third go at the Under-23s and my first medal. It just felt different this year, we’ve felt really confident all the way.”

The sculling duo were also clear water winners in both their heat and semi-final.

Current Hartpury rowers, A-level student Frances Russell and BTEC Diploma Sport student, Bryony Lawrence, were just kept out of the medals as part of the Junior Women’s Four, pipped for bronze by the USA by four hundredths of a second in testing, windy conditions.

With Germany and Italy powering away at the front, there was a three-way battle between GB, the United States and China for the bronze medal. Neck and neck at 800m, the Americans were able to pull away slightly but there was still just half-a-length separating the crews with 400m to go

The crew of India Somerside, Lawrence, Russell and Alex Rankin dug deep to put in a massive final push, clawing their rivals back with every stroke, but the US – who had finished clear of GB in the semi-finals – did just enough to hold on to third place by the narrowest of margins.

The Hartpury pair of Lawrence and Russell have enjoyed an extremely successful season, winning four national titles including the Diamond Jubilee Challenge Cup in the junior girls’ quad sculls at Henley Royal Regatta.

With the majority of rowers at the event having aspirations to push for places in the senior rowing teams for the 2020 and 2024 Olympics, the former and current Hartpury rowers have all laid down an early marker as they push for Great Britain selection.

Hartpury’s rowing coach, Tom Pattichis, said: “Given all the success that Great Britain have had in London and in Rio, it would be incredible to see rowers with Hartpury ties win an Olympic medal in 2020 or 2024.

“There’s a long, hard road for these girls to negotiate before then but if they continue to put in the hard work and produce performances like these on the international stage, there’s every chance we could see them on the podium.

“I know that Frances and Bryony were disappointed to come so close to winning a medal but it should not take the shine off what has been an incredible season for them and for Hartpury’s rowing programme generally, with six national titles secured.” 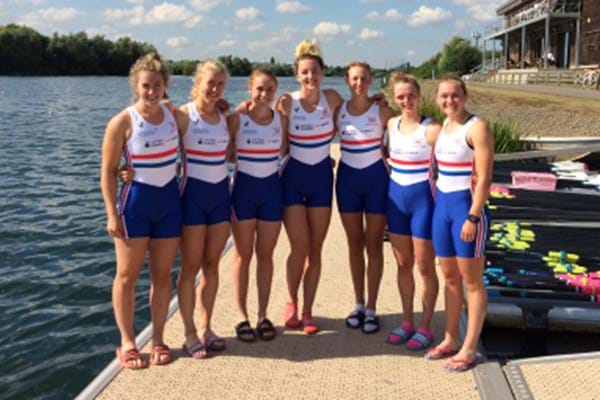