Our Equine Academy are currently in Belgium for two weeks supporting members who are competing at an International SJ competition. Content provided by Phillipa Winters - www.hartpury.ac.uk/belgium

Today the Hartpury team had another successful day! Katinka Brogaard riding Gavelston G started the day off again, Katinka jumped a lovely round, Gavelston G was very tired and had one pole falling. Next to jump was Isabelle Casgrian riding Azzero Z, they jumped a very nice round, collecting 4 faults as one pole fell. Lizzel Winter and Just Malone E jumped in the last class, the combination had a very quick time and would have finished 2nd however they had one pole falling. Everybody was pleased with their performances and can't wait to jump tomorrow on the last day!

The Hartpury results was a mix of high and low today, to start the day off Katinka Brogaard riding Gavelston G jumped in the CSIYH 5 year old class, they jumped a lovely clear resulting in a equal first! Katinka then rode Entertainer in the CSIYH 7 year olds 1.30 class, Katinka jumped a lovely round with one pole falling. Unfortunately Isabelle Casgrian and Azzero Z didn't complete the whole round in the 1.30 CSI2*. Last to jump was Lizzel Winter and Just Malone E they jumped in the CSI1* 1.20 they jumped a very quick round with just one pole falling.

The Hartpury team look forward to another good day tomorrow!

Today the Hartpury crew jumped for the last day of week one in Bonheiden.

Isabelle Casgrian and Azzero Z competed in the CSI2* although they had two poles falling Azzero Z and Isabelle Casgrian had a very good performance. The first week of Bonheiden finished on a high the team can't wait to see what the second week has instore!

It was an another early start for Katinka Brogaard and Gavelston G, Katinka and Gavellston G jumped very well at the start of the course but made a few green mistakes in the CSIYH 5 year old class. Katinka was also down to compete Entertainer later on in the day but unfortunately Katinka was taken ill and couldn't compete in the next class. Lizzel Winter competed Just Malone E in the CSI1* 1.20 class and came out of the arena with just 1 pole falling in the jump off. Isabelle Casgrain and Azzero Z had the day of from competing, but will be riding in the 1.35 tomorrow!

It was an early start to the day as Katinka Brogaard riding Galveston G jumped double clear in the CSIYH 5 year old class. Isabelle Casgrain was next to jump with Azzero Z, with one fence falling in the CSI2* 1.30 class. Last to jump was Lizzel Winter (academy director) and she lead the class until the very last few. Lizzel and Just Malone E finished 2nd in the CSI1* 1.10 by less than a second. Tomorrow Isabelle and Azzero Z are having a day off from competing whilst Lizzel competes Just Malone E in the CSI1* 1.20 alongside Katinka in the same class.

Today the Hartpury team competed in their first classes in Belgium, Katinka Brogaard, Isabelle Casgrian, and Lizzel Winter (academy director) have all passed the trot up. Katinka Brogaard riding Galveston G jumped in the CSIYH 5year old class, for just an unfortunate rail. Isabelle Casgrain riding Azzero Z jumped a lovely round in the CSI2* 1.30 class, with just the last fence falling. Katinka then finished the day jumping an excellent clear in the CSI1* 1.20 speed class, riding Entertainer. Lizzel Winter hasn't yet competed but the nerves are set as Lizzel's class starts at 8:00pm tomorrow evening!

I think I speak for everyone when I say a tiring day is far from an understatement! A long day of travelling is finally completed, as all of the academy crew have arrived safe and sound with big smiles and tired horses! Excitement is now kicking in for the trot up tomorrow morning! 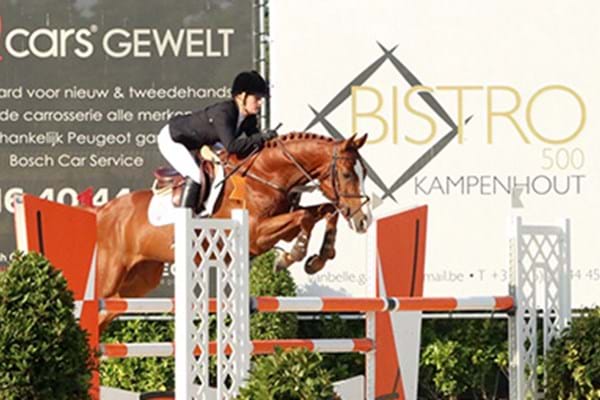