Students had the opportunity to hear views on the subject of Brexit and agriculture from Laurence Robertson, MP for Tewkesbury, local farmer David Barton and Gloucestershire’s NFU county advisor, Will Fraser. They then posed questions to the guest speakers and shared some of their own views.

Since the vote to leave the European Union, the agricultural industry has been coming to terms with the prospect of a future of setting its own policies again, which could bring about some of the greatest changes the rural economy has seen in decades. One of the biggest areas of concern among Hartpury students – the farmers and agricultural innovators of the future - was how money would be distributed.

Tilly Heron, 16, has just started the Level 3 Extended Diploma in Agriculture at Hartpury, having grown up on her family’s farm of around 1000 dairy cows - Taynton Court Farm - near Gloucester. She asked: “Will the government be more likely to re-direct the money saved from leaving the EU into areas other than farming, such as the NHS?”

The general consensus among the panel was that the future remains uncertain, while Will Fraser emphasised that the NFU are ensuring they have a presence during trade negotiations in order to fight the corner of farmers and the agriculture industry.

A high proportion of farm labourers currently come from overseas with up to 60% of workers in the poultry industry from the EU, and the free movement of people was clearly another issue that ranked of high importance to Hartpury’s students.

Former Hartpury gamekeeping student, Cormac Thompson, who now runs the commercial shoot at the College, felt that this could have a positive outcome in creating more jobs for British workers in UK agriculture.

This continued the theme of positivity and resilience laid down by Hartpury’s Director of Agriculture, Janatha Stout, who said: “Leaving the European Union could present an opportunity for farmers to set a clear vision for the future of the agricultural industry and contribute to the discussion surrounding future policies.

“This discussion was an excellent opportunity for our students to learn more about the potential implications for agriculture of Britain leaving the EU and share their views with a number of key influencers. They asked some excellent questions and showed that they had an excellent awareness of the issues facing farming in Britain in the future.”

Hartpury agriculture student, Matt Fuccione, from Winscombe, north Somerset, added his voice to the discussions, saying: “Farmers should try to be as efficient as possible to enable them to stand alone without financial support from the EU”. This echoed the sentiments of local farmer David Barton, who felt that some farmers are not fully focused on the cost of production and being more efficient because they receive so much EU support. 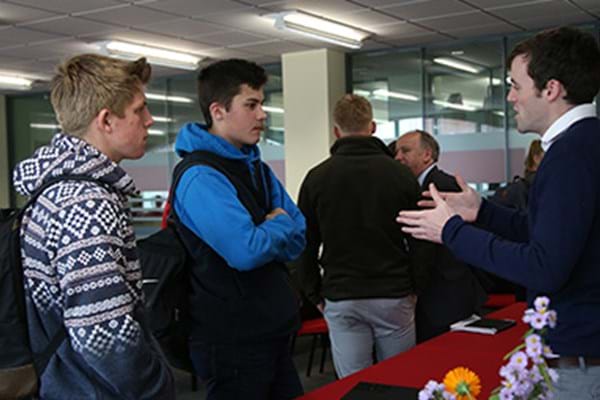